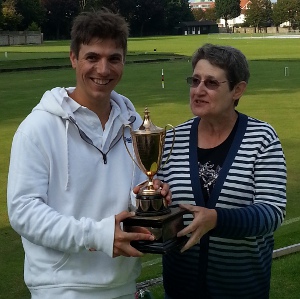 A strong field of 20 featured three winners of this year's invitation Eights and the runner-up in the fourth - a first for this event. It was good to see a quartet of newcomers: Christian Carter, Alain Giraud, Matt Holmes and Dominic Nunns; plus Duncan Reeve returning after a gap of 24 years. The weather was kind by day - only the occasional chilly breeze - but overnight rain on Friday was preceded by several hours of the most spectacular, continuous lightning display out to sea.

Gavin Carter (winner in 2012) was the in form player of the weekend remaining unbeaten until Sunday lunchtime and the third game of the best-of-5 final. Defending champion Jamie Burch impressed with his consistent shooting but conceded a game to each of Christian Carter, Gabrielle Higgins and Alain Giraud on his way to the final where, having lost the first two closely contested games, he came back strongly with a fifth turn quadruple peel in the third. Having won the fourth to level the match Jamie was first to 4-back in the decider only to be TPOed by Gavin who then uncharacteristically failed 2-back with his other ball allowing Jamie to finish and retain his title.

Jack Wicks dominated the Swiss, as he did last year, winning all seven games and throwing in two quadruple peels for good measure. Only Jamie had more peeling finishes, but Ed Duckworth sneaked the peeling prize with two triples and a fine sextuple against Alain Giraud. Matt Holmes's sextuple attempt faded after 4 peels, but he did achieve a (losing) QPO and later a QP.