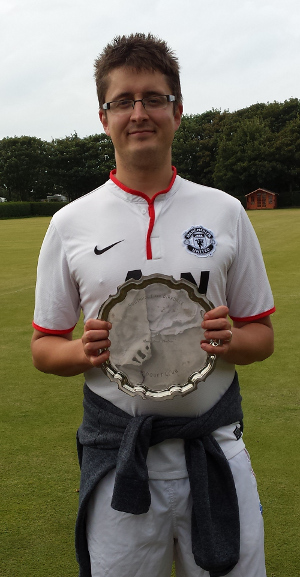 Phill Scarr ( Middlesbrough ) retained the Sandiford Salver beating Tom Griffith( Crake Valley ) in the final.
Late summer sunshine visited Southport lawns for both days of the Advanced Play Tournament to the extent that for a period on Saturday afternoon out players were actively seeking shade.
Lawns were in good condition for this end of season gathering and Manager Tom Griffith kept the play moving at a steady pace to ensure players took full advantage of excellent catering.
The tournament format was 2 Blocks of 4 players producing semi finalists from those finishing first and second in their respective blocks. Handicaps ranged from - 1 to 4.5

The semi final between Tom Griffith and Ray Lowe saw both players failing in attempts to peg the opponents forward ball out until ultimately Ray succeeded in this quest but unfortunately managing to peg his own forward ball out in the same stroke. The impromptu game of 1 ball with Tom on 1b and Ray on 4 was won by Tom plus 1.
The semi final between Phill Scarr and Derek Knight was less eventful with Phil continuing to play controlled croquet to win plus 20.