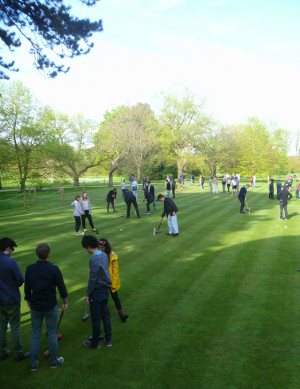 The tried-and-tested Oxford University croquet coaching started last week at the Oxford lawns. Given Oxford's short 8-week terms, the coaching is short and intense. We give a free course of four 1-hour lessons spread over the first four weeks. Each lesson is available twice each week. For reference the course is also available online as "Beginners' Coaching Notes".

Over fifty students attended the first presentation of 'Lesson 1' and we expect a similar number later in the week.

The courses are a pattern of demonstrations immediately followed by an exercise or a little competition, e.g. how many successive short rushes does it take to drive a ball to hit hoop one from corner 1? We have them going around in circles!

The pleasure of coaching students is that they pick things up very quickly. They also have small croquet lawns in their quads, ideal for practice, and seemingly huge amounts of recreation time. They are also very competitive.

College teams attend to glean an advantage in the intercollegiate 'Cuppers' competition. Teams of four players play each round as doubles with a pair playing away and one at home. So far we have had over 1600 students enter this year's Croquet Cuppers. Players who catch the croquet bug in Cuppers or during the coaching, can join the University Club to get further coaching and use the superior facilities. Subscriptions are £12 for the term or £24 for all summer.

We can claim that ~7% of the entire student population will be playing competitive Association Croquet in Oxford this year!!