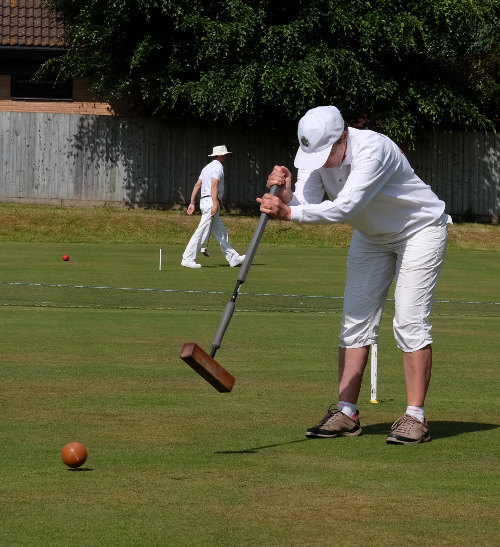 This event, now in its second year, was held on 13th and 14th June. The entry was 14 players, five from the home club the rest being at visitors. The lawns had been running quite fast in the weeks leading up to the competition so the hoops were set at 3/32" so as to give everyone a reasonable chance of maintaining their breaks. The manager had decided to use the Swiss format.

Heavy rain fell on the night before and the manager arrived to find some standing water, but smart work with a squeegee dispersed the pools to enable to play to start on time at 9.30 am

The third round started after tea. Kathy got over her disappointment from the previous round by achieving the fastest win of the day in 2 hours and 5 minutes. An hour into the round the light rain came back so back into waterproofs for the rest of the session. It concluded just after 8 pm. The two leaders at this point with three wins each were Caroline Denny and David Hunt (Nailsea). Many of us then repaired to the local pub for some food, drink and good company.

Sunday morning brought us blue skies with the odd fluffy cloud and the fourth round started on time at 9.30. The two leaders had a close contest with a fine example of sportsmanship, typical of the best competitors, shown by David. He started a break at hoop 3 and went round to 3-back, setting up for a classic, quality leave after this hoop. His approach shot to the hoop was simple, but immediately after playing it he declared that he had double tapped and came off the lawn with the balls in a good position for Caroline to continue. He was nevertheless ahead when time ran out, but instead of playing defensively to preserve his lead tried to run more hoops. He failed to run 4 back and so let Caroline in to score the two hoops needed to take the lead and win the game.

Sunday afternoon brought new challenges for the outright leader, Caroline, who was on four wins against Dr Stephen Custance-Baker (Taunton) on three wins. Another win for Caroline would assure the trophy, but if she lost and David Hunt won against Philip Harris (Sidmouth) there would have been a three-way tie for the lead with no way of separating them on the 'who beats who' logic, which would have required the tournament manager to devise a tie break. As it happened Caroline pulled out all the stops to beat Stephen 26 - 0 in an astonishing display of skill in three breaks of 7 hoops, 12 hoops and five hoops plus two peg points to win in just 53 minutes.