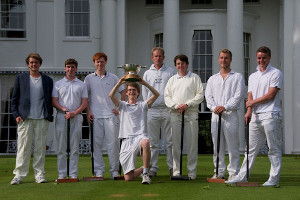 Eager but nervous teams from Oxford and Cambridge Universities converged on the Hurlingham Club for The Annual Varsity Match. Oxford had a good spread of abilities ranging from 4.5 handicap up to this year's new crop of recruits, now playing off 10-18 after just 7 weeks training. The match however is played level-advanced, hence it depended on the Cambridge team's abilities. Unfortunately Cambridge's top player, Will Gee was wired from the event by a 'diary problem'. Seasoned Varsity player Cesar Miranda-Reyes was Cambridge's Captain and fielded Oxford-export Luke Valori, who started his Varsity career playing for Oxford in 2010. The remainder of the Cambridge team were dark horses with mostly unknown abilities.

The teams were delighted to be joined by Bevis Sanford who is still supporting and enjoying the Varsity at the age of 97. He spoke to many of the players and shared anecdotes spanning some 80 years. At lunch, kindly provided by the Hurlingham Club, he was joined by two of the other sponsors of the event, Hugh Carlisle and John Culhane. John welcomed the players and hoped they would be inspired to go on to great things.

The final result was Oxford 7, Cambridge 2. This was the 11th consecutive win for Oxford, but things would have been very different if Cambridge had been able to call on their star player, Will Gee (-1).

A fuller report can be found here: users.ox.ac.uk/../varsity_15.shtml