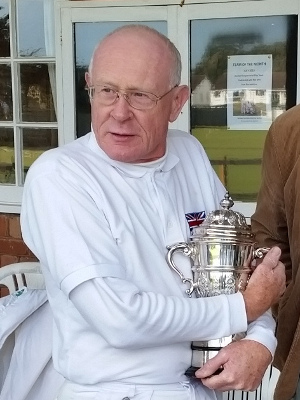 David Harrison-Wood (The Panther) won the Spencer Ell with a round in hand.

Round 3 saw a very lengthy pegged-out game between Panther and Rachel after Rachel pegged one off at the end of a TP, expecting to hit-in easily afterwards. Panther played very conservatively and accurately, never allowing Rachel an easy or unguarded shot; but eventually he blobbed Rover giving Rachel an easy finish.

Round 8, again Panther, hit peelee after Rover on a TP and pegged two off leaving peg vs. Richard Smith on 6. Richard hit and rolled off 6 from the E boundary giving himself a rush to 1b - ran it hampered and rolled up to a 6-yard 2-back, which he ran but failed to approach 3-back sending Panther almost to the E boundary. Panther centre-balled the peg.

In round 9, Dave Kibble finished a straight Rover peel for 26tp against Richard but watched with dismay as the rush, having cleared Rover by almost a foot, curled to nudge into the peg with its final millimetres of travel. Richard quickly went round to peg leaving Dave in corner 3 and himself with a corner 1 trap, though having seen Dave's shooting decisions in their previous encounter (a Richard TPO), the balls were perhaps too far apart for good control. Dave went to mid east boundary, Richard dribbled and hilled off, Dave centre-balled the peg.

In the final round, Dave Kibble made good progress with a sextuple but had exhausted his luck by the time he came to an 18" slightly angled Rover peel - the peel went cleanly through but striker's ball hit the wire and bounced to the side.

Budleigh Salterton Croquet Club made the players very welcome, had prepared the lawns to a high standard, and cut them and set the hoops before play each day. Despite there being only eight players, a volunteer was found each day to cook up an excellent lunch. Tea each afternoon included a choice of four splendid fresh cakes. What more could any player expect?