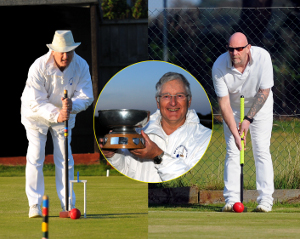 He beat the unlucky Peter Dowd of Northampton by the 'who beat whom' rule and effectively just a single hoop!

The sixteen strong field was just that - strong - comprising as it did, of twelve winners of B-Level Series qualifying tournaments and four players who had amassed points for good placed finishes.

Shore himself, had qualified via this latter route which rewarded his constancy through the season, that had earned him two runner-up and two third places at Series tournaments.

The B-Level Series is for players with handicaps in the 3 to 8 range (on a qualifying event's allocation day) and has been a huge success this season, with most of the 18 Series events being either full or over-subscribed.

The final was superbly hosted by Hunstanton CC on their fine Norfolk courts, that were wonderfully turned out for the occasion, and especially so given the time of year.

Things got off to an unexpected start, when the top ranked player Graham Good lost his first three games and second ranked Keith Southern won on one of his first five, but there was plenty of time for 'come backs' with the format being one 'all play all' block of 15 (13-point) games over two days.

Shore lost to Enfield's David Frost in the second round and so was 'off the radar' so far as the leader board was concerned at least initially, and appeared to be still trailing Frost and Dowd at the half way point.

However, the leader board hid the fact that time had defeated manager Chris Roberts who, with the light failing, had had to agree to two Saturday games being held over until the following day, and so Shore would also be level on wins if he won his game in hand.

Eleven players left the pretty-well dark courts and joined Roberts for a tournament pub meal, that hardly contributed much to the local economy much, thanks to Hunstanton host Terrey Sparks' thoughtful provision of a local paper 'half price meals' voucher!

Day two resumed with everyone having won at least two games from their first eight, and the aforementioned trio being pursued by Bishop Monkton's David Widdison, at two victories adrift.

The winner looked like coming from the leading three though, but with Frost having beaten Shore (by a single point), Shore having beaten Dowd (also 7-6), and Dowd scheduled to play Frost in the last round, it was certainly too close to call.

Enter Roger Stroud of Leighton-Linslade - he only won four games in total but had a huge influence on the final outcome of the tournament, when he effectively ended Frost's challenge and then in the penultimate round against Shore, ran his first ball to hoop 13 through the back of the hoop to a wired position from long distance, to win that one too.

Shore must have thought that he was 'done for', but there was more drama on the adjoining court where Dowd grievously peeled Frost through hoop five in the pair's final round game, and that proved to be the pivotal score that earned Frost the win (and yet another 7-6).

So it boiled down to Shore needing to win his own last round game against Richmond Park's Michael Bilton, to get level again on wins with Dowd, in the knowledge that his 'head to head' win from Saturday afternoon would be the clincher.

Poor Dowd could only watch, as indeed did the rest of the field, as rather nicely, the crucial game was the last to finish.

Bilton made Shore work to the end, but the High Wycombe man had shown good ball control throughout the tournament with centre ball clearances and jump shots being his main weapons.

And it was with a latter style stroke that he took the National B-Level title at the tenth.

CA Council member Terrey Sparks made the presentation and complimented all the competitors on a terrific closely contested tournament, played for the very much the most part, in the best of spririts.

The full results are on www.croquetscores.com thanks to Hunstanton treasurer David Boxell, who taught himself how during the fisrt morning and then undertook the results entrering task in 'real time', which was a first for this event!

However, applying the advertised block tie-break criteria, the final finishing order is different to the simple 'net hoops' method that croquetscores employs, and so, for the record, here it is: