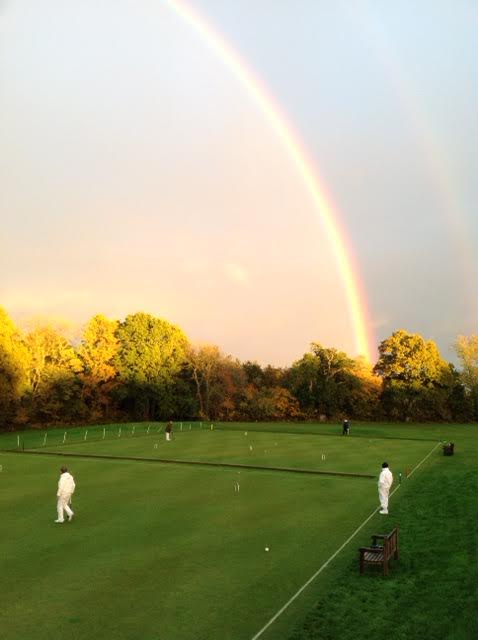 This is a two day tournament between the CA and the CA of Ireland for the McWeeney Trophy.

We started Friday evening with a 'fish and chip' reception kindly hosted by Richard & Diana Stevens. Saturday we breakfasted at the club before venturing out into the damp weather. Despite the weather, the Hamptworth courts were playing well. Timings were very tight as daylight is in short supply at this time of year. However we managed three rounds of level-play advanced before the day ended with a beautiful rainbow follwed by a great sunset. We then trouped off to sample the delights of the 'Cuckoo' pub before a tournament dinner at the Royal Jaipur Restaurant. Day two was bright and sunny all day.

CA of I Team

The second day was bright and sunny all day making it a real pleasure to play on the courts at Hamptworth. In the first round of the day a second set of doubles were played with the folowing result

The last round of singles were completed either side of lunch.

making the final score 14-12 to Ireland.

On behalf of the CA Brian Fisk presented the Vera McWeeney Memorial Trophy to Nathaniel Healy, the Irish captain. In his acceptance speech Nathaniel paid tribute to the hard work of the Hamptworth Club in hosting the event, to Richard Stevens for stepping in to organise the fixture, to the CA team for making it such a friendly and enjoyable event, and to Brian Fisk for managing, refereeing, and captaining the CA side.

Next year the fixture moves to Carrickmines in August.