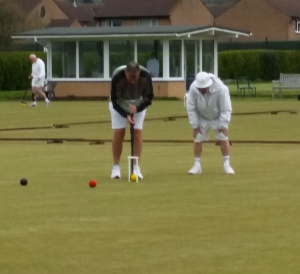 by Dave Kibble at Cheltenham
2nd May 2016 (AC - Championships)

Reg Bamford won the Coles ("not the Western") Championship beating James Hopgood 3-0 in a final in which James (having been let in by Reg forgetting they would play the third SA) was unlucky to finish a TP with an Irish Rover that left a difficult shot at the long ball that nicked partner - with an almost impossible peg-out, he went for it, leaving partner a yard from the peg. He chose to decline the combination peg-out in favour of a leave with a 12-yard shot. Reg nicked the shot and went round leaving no shot at the peg and a 40 yard shot at a trap leave. James cornered letting Reg try a 2-ball finish, which came to grief when Reg over-ran the rush out of 3-back but made an impressive cut rush toward the corner 3 ball but not close enough to get a rush on it. The approach to 4-back was short as was the ball being sent towards corner 1 leaving James with a chance with an 11-yard peg shot, which narrowly missed but nearly clipped Reg's ball in the distance. Reg finished +26SxP, +26SxP, +1

In the photro: Reg nails a close angled straight Penult peel for his second sextuple of the match.