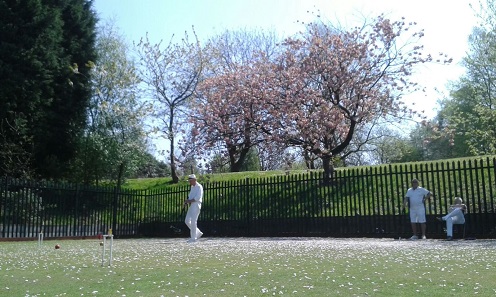 With blossom from an over-hanging tree decorating the courts of Bury's Coronation Park venue, reigning Inter-Club Champions, Ashby survived a potentially tricky away tie to start the defence of their title.

Ashby had three of their 2015 final winning team playing but Will Gee (the other member of that team) and other frequent representative Rachel Rowe were not available for this weekday fixture.

Team captain Ray Mounfield had made the selfless decision not to pick himself and volunteered to do the driving, instead selecting his wife Christine who in April had won the Ripon Rowels GC tournament.

Ashby arrived to discover that first time entrants Bury were slightly weaker than planned with David Barrett recuperating from a surgical operation but benefiting from Matt Holmes deciding to see how successful he could be in applying his substantial AC expertise to GC.

Glorious weather instilled a relaxed air to proceedings and added complications such as challenging hoops and relatively fast courts made for rubbers that took time to progress. A 7-0, 7-2 win for Tim King was the first to finish but even that took over two hours.

The afternoon matches did not start until just before 15:00 after a leisurely lunch where the players enjoyed being inside away from the sunshine (although a lively breeze prevented the heat from being oppressive). At this point, the match was evenly poised.

Matt had won the other morning singles rubber for Bury. Meanwhile, Ashby showed good form in the first doubles game but then Bury stormed back to level the rubber at 1-1 and the concluding game was put on hold to be played if needed to decide the result of the whole match.

The afternoon play progressed at a similar pace to the morning. Chris was the first to score a point, showing excellent mental strength after feeling that she had struggled to deal with unfamiliar court conditions in the morning.

Ashby then took a 3-1 lead, after Tim had almost failed to hold onto an early advantage in his first game against Matt but held his nerve to win 7-6. The former then hit a purple patch, putting pressure on Matt, who, still early in his GC career, began to struggle with confidence in his decision making.

More than 10 years since his only previous visit to Coronation Park, Tim put the penultimate nail in the coffin by repeating a trick from that occasion. In 2005, the Bury courts still had the crown slope from the previous incarnation as a bowls venue but in a Longman Cup (AC) tie, he ran two hoops in one shot to the astonishment of his opponent Barbara Young. In 2016, hoops 5 and 6 were the victims and Matt knew that luck was not going to be on his side on this occasion.

Paul Rigge then gave Bury hope by beating David Bell. At this point, the match looked destined for a late finish because, after losing his first game, Ken Eccles put Mike O'Brian under pressure by taking a 5-2 lead in the second. This posed the possibility of a third game, which if Ken had won would have been followed by completion of the doubles rubber.

Mike, however, was able to secure the win for Ashby at a deciding thirteenth hoop.

The Ashby team was certainly glad to travel home victorious so that five squashed in the car did not have to spend a long journey contemplating any recriminations. They go on to play the winners of Belsay Hall and Bowdon in the quarter-finals.

Bury were the perfect hosts and especial thanks must go to Margaret Eccles who played in the company of seven more experienced players, organised the catering effort and despite her poor results played with a smile and generosity at all times.