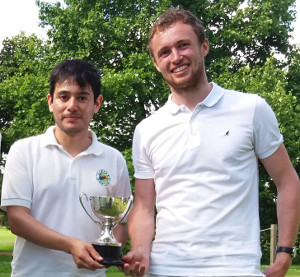 With a bye given to the four returning semi-finalists from 2015, a four-stage knockout tournament for the Student Open Championship saw an Oxford vs Trinity College Dublin final match of Jordan Waters vs John Francis Martin. The Dudley Hamilton-Miller Trophy was awarded to Jordan after a very close final with a result of +1 on time. The Students' Team championship consisted of a three-stage knockout tournament due to limited time and the Edmund Reeve Trophy was awarded to the Cambridge team consisting of Cesar Miranda-Reyes and Craig Winfield who emerged the winners of their match against the Oxford team consisting of Mark van Loon and Harry Williams.

Despite the consistent rainfall, this was a fantastic event and great to see students travel far from Oxford (Cambridge and Ireland) to make it to the tournament.