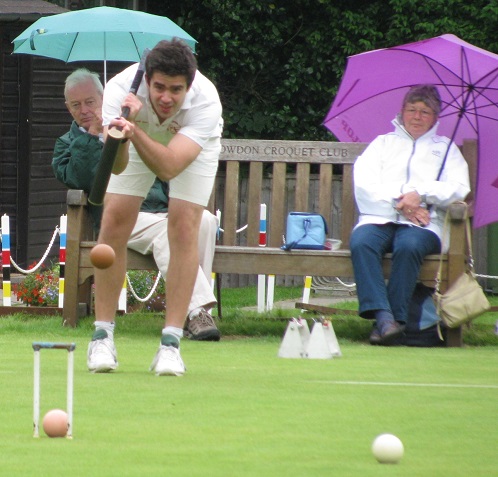 Will Gee jumps from boundary at hoop 1 to set the tone for his second game against Dave Crawford (Photo: Arthur Rowe, Ashby Croquet Club)

Bowdon fought bravely to force all the rubbers to be played in this match but, after having 5-4 leads in both of the deciding games, they failed to secure either.

For the third year in a row, Bowdon and Ashby were playing in the GC Inter-Club Championship.

Last year, Bowdon had travelled to Ashby, who had been keen to make amends for their loss in the first meeting of the two clubs.

Home success for Ashby meant that this year had the sense of a decider.

Bowdon were not quite at full strength, while Ashby demonstrated the strength and depth of their squad by making three changes from the team that had beaten Bury in the previous round.

The home team started well, winning the first game in the doubles and Graham Good taking a 4-0 lead over Tim King before eventually taking that game 7-5 after Tim had pulled back to 4-4.

Ray Mounfield, however, took the first point of the day, for Ashby, although Frank Moir battled in their second game to lose the rubber at the golden hoop.

The rest of the Ashby team began to find better rhythm and won the second games in the other two rubbers. These wins took play to lunch, so (slightly unusually) the captains agreed to hold back both rubbers until after the completion of the afternoon singles.

These results took the score to Bowdon 1, Ashby 3.

The doubles resumed as Good and Mounfield were in their third game.

Ashby began to look good for victory, especially when Mounfield took a 6-4 lead. Good, however, showed impressive composure to win the last three hoops and make the match score 2-3.

The doubles was not yet near completion, so Good resumed his rubber with King. The latter, in concentrating on his own play, lost track of the doubles with Bowdon leading 5-4. He failed to realise that Ashby came back to win, so when he also went 4-5 down, he began to feel under pressure but repeated the feats of his team-mates by winning three hoops to give the match a comfortable looking score.

The Bowdon catering was delicious and the players enjoyed good camaraderie despite the overcast conditions and a couple of spells of rain.

In the semi-finals, Ashby will play the winners of Cheltenham versus Phyllis Court.