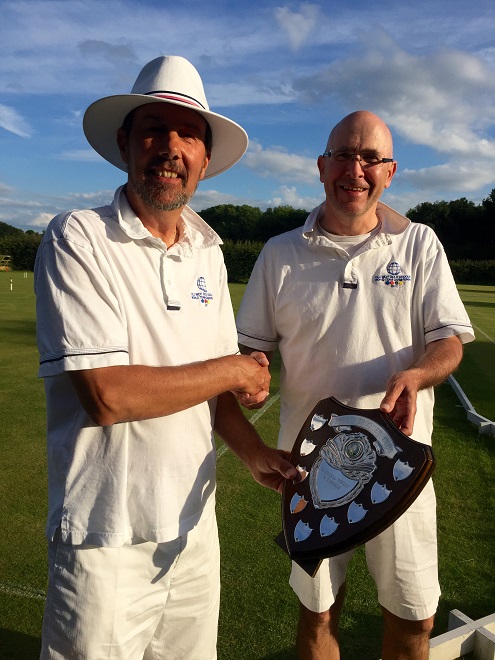 Martin French held his nerve through a tough second day of the National Forest GC Championship, winning the final 7-6, 2-7, 7-6 against David Bell.

This was the sixth running of the championship, hosted by Ashby Croquet Club in the former mining village of Moira.

Despite the National Forest often not living up to its name, the club's courts are surrounded by plenty of trees in a generally quiet rural setting. The club only has three courts, so the championship is not able to provide as much play as larger clubs when the entry reaches the maximum of 16 players.

The Tournament Manager was Tim King and he was determined to conduct the main event knockout as three rounds of best-of-three, 13-point games on the Sunday.

This plan required a suitable scheme for play on the Saturday and, after careful consideration, the manager found a solution in the form of a pre-drawn Swiss. This solution gave each player six games, facing (using seeding position as an indicator of strength) the same total difficulty of opponents as every other player.

The entry for the championship reached a total of 16, consisting of four clear top seeds, all from beyond Ashby, with the remainder of the field including a further four visitors and eight local players.

The Swiss proceeded smoothly and exactly three quarters of the games were won by the higher ranked player.

In terms of the expected eight qualifiers for the quarter-finals, the two under-performers were Arthur Rowe and Ray Mounfield, who only won three games between them.

The top seeds, in general, made expected progress. Defending champion and top seed John-Paul Moberly was undefeated, beating both Nick Mounfield and Martin French. Nick, though, also suffered the most surprising result of the day, losing at the golden hoop to Eileen Buxton (15th seed).

Arguably, the top performer of the day was Kath Wright, who failed to qualify but four losses included three of 6-7 (and the other was 5-7). Kath, as a consequence, achieved a net hoop score of +2.

The qualification cut-off fell in the midst of three local players on three wins (with two places available): Mike O'Brian; Chris Mounfield; and Martin Wroughton. Mike had played and beaten Chris, so Chris and Martin played off for the eighth spot in the quarter-finals. The former won 7-3, with this extra game still only taking the close of play to 18:15.

Sunday dawned with a continuation of the largely fine weather of the Saturday.

The quarter-finals each progressed steadily and although three of them included a 7-6 score in the second game, all finished in two games.

7-6 was somewhat of a feature across the weekend, with a total of 20 games (out of 77) going to the golden hoop.

The results of the quarter-finals went to seeding and, thus, the semi-finals pitched John-Paul Moberly against David Bell and Martin French against Nick Mounfield. Nick had been a doubt at times during the weekend as he battled with a sore shoulder but he continued his determination into his match against Martin, who twice looked comfortably clear but both times had to hold on and survive at the golden hoop after late surges by Nick.

Meanwhile, the other favourite was having even more of a struggle.

Having been unbeaten in his eight previous games, John-Paul went 0-2 down in three successive games. His considerable talent hauled him back in the first but, under pressure for the first time in the weekend, he lost his rhythm and David made a series of clutch shots, including some mid-range jump shots that held John-Paul firmly back from swinging the momentum.

The defeat of John-Paul took almost 3.5 hours and showed the potential downside of playing three best-of-threes in a day. The result also broke the sequence to date of the trophy always going to a player no older than 24.

The final was no less of a battle than the semi-finals with Martin once again undaunted in tight finishes. He played steady croquet to take the first game 7-6 but then began to show tiredness and lost control in losing the second 2-7.

David, however, fell behind in the third game to make Martin the clear favourite at 5-3, despite the latter bemoaning to the few remaining spectators his lack of energy. David kept on hitting enough of his big shots though and the final climaxed in the archetypal third game, hoop 13 battle.

Martin made just enough advantage from having first approach, leaving David on the back foot. The former, however, left the possibility of a final dramatic twist but David was only able to hit the inside leg of the hoop from seven yards, leaving Martin a trivial last shot to finish the day at 19:15 with almost everyone else having left to other engagements.

Each of the top four had their spell of looking like the potential champion but Martin showed the mental strength necessary to take advantage of his opportunities.

Not many tournament winners will have four 7-6 wins across the combination of semi-final and final, along with a net hoop score of -1 across the two rounds.

In the plate event, Kath Wright continued her excellent form from the Saturday and won all three of her games to come top of the super block formed by those who did not qualify for the main knockout. She was a deserved winner of a bottle of wine for her efforts.

Martin French and David Bell qualify to play in the Ascot Cup final, to be held at Hurlingham on 17 & 18 September.