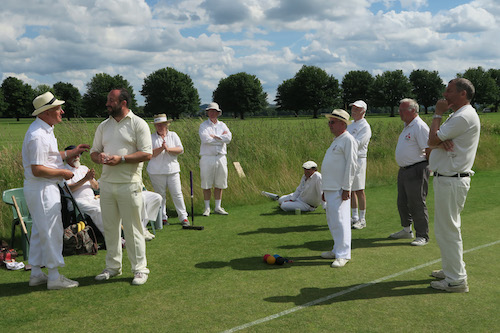 "The past is a foreign country: they do things differently there." LP Hartley could have been describing croquet in 1976. Just under half the 39 club tournaments listed in the Fixtures Book were six-day events lasting from Monday to Saturday, and double-banking had only just received CA approval. The August issue of the Gazette contained guidance notes including the suggestion that the second game be played with the court turned through 180 degrees with the option of the crowns of hoops 3 and 6 being marked green and pink.
One tournament from that year is unique. In July Wrest Park put on the first open, i.e. advanced, weekend to appear in the calendar. Eric Audsley played in it, and, forty years on, managed this year's event. The entry was evenly split between club members and visitors, and eight of the 12 players were on scratch or below.
The winner was Richard Waterman from Colchester, whose play belied his handicap and resulted in six wins in eight games, including victory over a rejuvenated David Marsh who won the prize for the most index points gained and narrowly missed out on a triple against John Bevington when he ran into partner after the rover peel and failed an attempted pegout. Cliff Jones, who was playing on the same lawn, later showed him how he should have done it.
Close on their heels were Annabel McDiarmid, who completed a triple at Nigel Polhill's expense, Nigel, with a TP against John Bevington, Duncan Hector with a TP against Cliff Jones, and, making a welcome return, Phil Cordingley, who lost his first three games but then got back into his stride and won the last five.
Our thanks to Tim Brewer, David Woolley and John Tew for the catering. Weather: sunny and reasonably warm, with light showers on the first two days.
Richard Waterman (1.5) 6/8
David Marsh (1) 7/9
Annabel McDiarmid (0) 6/9 1TP
Nigel Polhill (-.5) 5/8 1TP
Duncan Hector (-1) 5/8 1TP
Phil Cordingley (0) 5/8
Nick Steiner (0) 4/7
Rod Ashwell (0) 3/6
George Collin (0) 2/8
Cliff Jones (-.5) 2/8
Eric Audsley (2) 1/8
John Bevington (1) 1/8