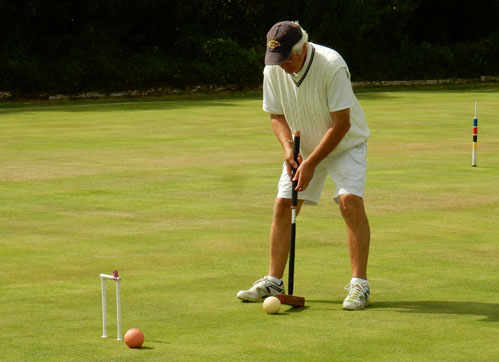 John Henderson In Play At Fylde.

10:34 I have a wonderful view across the three lawns here at Fylde, all occupied with our regular visitors and some new entrants. It strikes me all the pegs, peg extensions and corner pegs are exactly as specified in the laws in every respect. Indeed further to that, the secondary clips are all modified for colour vision. One of the three lawns is exactly the right size and I enjoy the diagonal view from yellow flag to red flag through the perfectly formed peg and extension.

12:38 My rather nice lunch is interrupted as the final game finishes, Second round pairings easy as pie (which was also my desert).

SHOT!
14:04 I refereed a shot played by David Lloyd. His ball was in the jaws of penultimate only about 25% through and slightly West of centre. He was attempting a roquet on White about two feet due West of the perfectly formed peg. This was achieved taking some wire with a clean crisp shot.

15:03 there are 112 points scored out of a possible 306 in this round with 90 minuets left. Players are rushing around applying Sun block as the Blackpool micro-climate kicks in. The man in lederhosen is firmly out of my Black Forest weather-house. So I take my jacket off.

15:05 Found phone in jacket pocket. Checked Pokemon. Nothing as usual, wish I was at Bristol with David.

16:14 It is great to see so many spectators here. Oh, hang on, they are not spectators, just players waiting for me to make the next round pairings. The last games are concluding. But there are actually several spectators here today.

SHOT!
16:15 Local man Philip slow plays a shot at a wired ball that curves a few inches to hit.

GOOD PLAY!
16:55 Philip is in the best break of the tournament. It is happening on the time turn of the last game to finish which started late. It ends at 4Back and the game is over -2.

17:27 Following long games there are a few players still in the recovery position, getting sprayed with water and cooled down by towel waving trainers, but most third round games started a while ago.

GOOD PLAY!
17:29 Jim plays a blinder going to 4back on the third turn. He should have made that hoop but looks as if the adrenalin of a good recovery shot kicked in to make him miss it.

18:44 Some games still with 90 minuets left on the clock. Few sticking around watching the Sunset, having refreshments and wondering where the yellow clip is on lawn 5.

9:30 A prompt start in Sunshine. Our club bell may not have the provenance of coming from, say, the Titanic, but it did come from the historical Heworth Hall in Gateshead. It was donated by Aspire TS who moved into and refurbished the building about five years ago. This company also provided the Jubilee Trophy which is being played for today.

10:10 Speaking of the Titanic, the two games on court #1 both have players conceding 14 bisques. I'll keep a look out, but some pulling has been done already.

SHOP!
11:11 No that is not a typo, I have come back from the supermarket with deserts and having refreshed the refreshments. Found all games bathed in Sunshine and surprisingly still in progress.

12:30 The potatoes are taking longer than expected. As are the games.

13:30 We are into the last round now. The Swiss has thrown up a possibility of eight different results, six of which would need a tie break. Three of the four two way ties are sorted at level two ( who beat who) but the remaining one needs level five (AMD) . In the two three way ties possibilities, one is resolved by level four (who beat all the others), while the other is AMD. The fifth level AMD is quality of opponents game scores. Still with me?

SHOT!
14:23 John Henderson makes a long roquet to get back in against Eileen Gallagher. One of these two will end on 4/5 and may win outright if Joe Lennon or Marjorie Eldon do not tie with them. The Rig Helicopter comes over us into Blackpool lower than I have ever seen it. 200 feet? These guys coming back from 14 days on the rig probably asking pilot to give them a view of the clippage on lawn 5.

REFEREE!
15:24 Wiring lift on lawn 3 not given to Joe by LW. Looking through the binoculars from the clubhouse I must agree.

15:25 Wondering what will run out first. Denise's bisques or the white wine in the bar. ( I admit this is simply building suspense into the report in homage to Douglas Adams).

16:12 Both Joe and Marjorie have lost, turning the John v Eileen G. game into a simple final.

16:44 John Henderson from Penrith pegs out against Eileen Gallagher from Southport & Birkdale to win the tournament. Uncountable runners up on 3/5.

NICE SPEACH!
16:45 Thank you to all players for their support, conduct, sportsmanship and carrying ball markers. Thank you to the back room staff and helpers. Thank you Ian, those white lines were very straight. Thank you Philip Bass for the beautiful lawns. Thank you Liz Wilson for the main catering and tournament vision.

MEMO
18:30 it was Denise's bisques that ran out first.