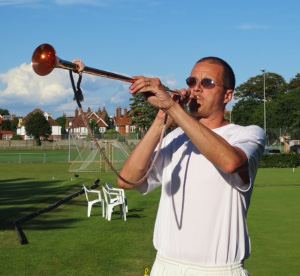 At the end of June, with just a month to go, and only two entries received, the gloomy prospect of cancellation loomed large. However July came and with it a steady trickle of additional entries; thus the day of the competition dawned with a very respectable field of 14. It was decided to play best-of-3 matches from the second round onwards - fortunately the contestants obliged and all play was duly completed before 6pm on Sunday. Favourable comments about the improved quality of the lawns were well received and we are aiming at further improvement in the years to come.

We were pleased to welcome Rob Edlin-White, Tudor Jenkins, Dominic Nunns and Joel Taylor making their first appearance in this event. Particularly welcome was the return after many years of four-times COWhorn winner and two-times COWbell winner Phil Cordingley who has clearly lost none of his gusto and will to win. His only losses during the weekend were to Luc Berthouze in their semi-final; after which he beat Joel Taylor in the third place play-off. Jonathan Lamb certainly found his form and fought his way to a well-deserved place in the final against Luc; but there his shooting deserted him and Luc ran out the winner in straight games finishing with a fine triple when Jonathan was for penultimate and peg.

Defending COWhorn holder Roger Tribe owned to being out of practice but soon got into his stride completing three triples. He was just pipped at the post from winning the Swiss by Dominic Nunns who, having lost to Jonathan in the knockout, won all his Swiss games to take the COWbell. Dave Kibble, despite troubles with his trusty bedside clock, took the Ace Peeler's helmet.

Off court interest was provided by Dominic applying his professional horn playing skills in an attempt to extract a tune from the COWhorn, a success which has eluded all previous challengers. But it seems that the instrument was probably manufactured for show rather than music making and he could only find three notes - so the horn is somewhat diminished in repute but still remains ideal for the mantelpiece!