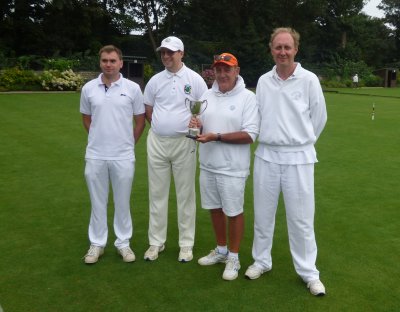 This years GC inter Counties was held over the weekend of 20/21 Aug with a full complement of twelve teams and all of Southwick's eleven lawns in use. Most competitors arrived with full waterproof kit after a rather horrific weather forecast. Although we did have one short period with almost gale force winds and driving rain, it conveniently occurred just after most players had finished round 4 on Saturday. So we all gathered in the canteen and had an early tea. The wind however was quite strong all weekend and gave many of the big swingers some problems. At close of play on Saturday Middlesex had retained a 100% record but were closely followed by Leicestershire, Glamorgan and Durham/Yorkshire each with only one loss. At the other end of them scale Surrey and Oxfordshire had not yet managed a win. Sunday started clear and bright and so did Middlesex who continued in their winning ways all through the competition. Their nearest rival however rather stuttered and the nearest two teams only managed eight wins against the eleven posted by Middlesex. There was extra pressure this year to keep away from the two bottom places as there is a likelihood of two new Counties applying. This will mean that the bottom two have to play off for places next year. The standard at GC Counties appears to get stronger each year with a very good turnout from our younger top players such as John-Paul Moberly, Rachael Rowe, Will Gee and Tobi Savage all turning out for their county. Handicaps ranged from -4 to 3 with an average of just over 0. The final results are as follows