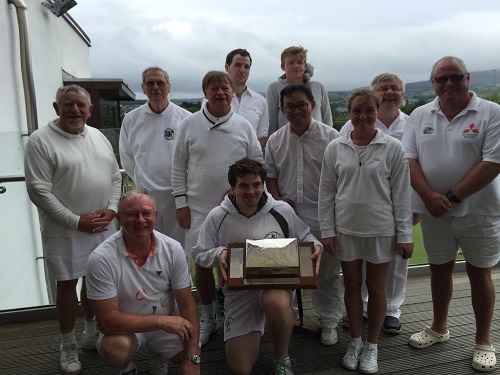 A team of six players from the CA travelled to the Carrickmines Club in Dublin to play the CA of Ireland. The CA team was Brian Fisk(0), Brian Shorney(7), Jim Field(-0.5), Alison Girdlestone(3), Eugene Chang(0) and John Bee(5). The CAI team was Danny Johnston(-2), Alan Looney(4.5), Fiachra Carrol(3), Gerard Osborne-Burke(4.5), Daniel Bennett(4.5), Simon Williams(-2), and Nathaniel Healey(0) - I know that's seven but Simon and Nathaniel played one day each. The idea is that teams of similar handicaps are picked to make the contest fair. Due to last minute selection problems the Irish team was quite a bit stronger than the English team. It showed in the results as we lost 10-14 though if you look at the results it could easily have gone the other way; many of the games were quite close. We played six doubles and eighteen singles games level advanced over two days. The highlight was a quintuple peel by Simon Williams in the doubles. Danny Johnston was awarded the Maugham Quaich for the best player having won all his games.

Results aside it was a very friendly affair played in exactly the right spirit. The Irish weather, unlike our hosts, was not very welcoming. It was wet with very strong gusts of Wind on the Saturday though it did cheer up on the Sunday. The CAI entertained us all to dinner on the Saturday night which was a very convivial affair. They very kindly chauffeured us around all weekend and supplied us with lunch. We look forward to welcoming them back to England next year.

If you are interested in playing next year please make yourself available via this web site. If you think your club might be interested in hosting the event please let me know.

Full results were as follows