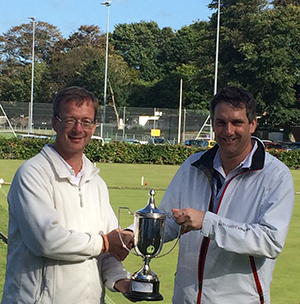 A full field of 22 contested the North of England Championship, including several first timers at Bowdon, such as Jose Riva who flew in specially from Madrid to add an international flavour. The overall entry was pretty strong, with 16 players having handicaps of -1 or better. There were few surprises in the main event knockout, though Joel Taylor had a good win against Chris Williams, and Debbie Lines got through against David Walters, who had to withdraw following a wrist sprain. Despite the fine weather throughout, the tournament always looked in some danger of not finishing, although Ian Lines beating David Goacher with two +26tps did at least ensure that the best-of-five semis could start on Sunday morning as planned. The most entertaining game was probably Jose's +1otp against Debbie, where Jose's excellent shooting proved decisive.

In the first semi, David Maugham was clearly too good for Ian Lines, who was lucky to take a game in the best-of-five. In the other semi, Jose Riva didn't play as well as he had earlier in the tournament, and James Hopgood won 3-1. The final started at 9.30am on Monday, and it looked at 6pm as though David would win 3-1 after completing a tpo, but David was slightly hampered after 3-back and missed a 5 yarder, leaving James a 16 yard shot at a double, which he duly hit and finished from hoop 2 to level the match. James then had to leave to catch a plane (the manager had agreed this when accepting his entry) and it has been agreed that the final game will be played at the South of England Championship.

STOP PRESS - The final game of the final was played on the first morning of the South of England Championship. James took the title with a +25tp win.

In the plate, the most remarkable performance was by Alison Girdlestone (handicap 2.5) who had a string of five consecutive wins, including her first tournament triple (gaining a CA gold merit award) and wins against James Hawkins (-1) and Dave Kibble (-1.5). Alison later went on to record her best ever win by beating Ian Lines (-2) by +6, after Ian only made one error breaking down on a triple. Alison's handicap was duly reduced to 1. The final of the plate was contested between David Goacher and Dave Kibble, which Dave Kibble eventually won +16 after a good attempt at a sextuple.

Many thanks to Bowdon for hosting this great event and to all those involved in preparing the lawns and providing all the excellent catering. Thank you also to Barry Keen and Colin Irwin for setting all the hoops - all very well set to 1/32" - and a little tighter for the semis and final.