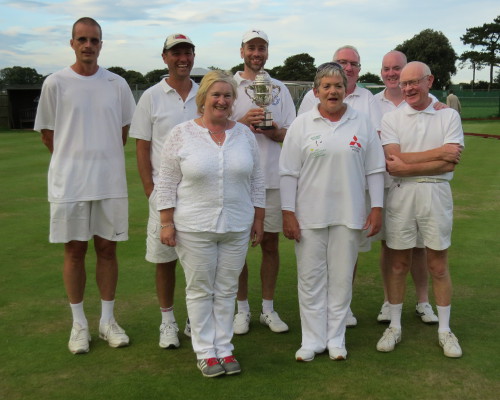 Hunstanton provided nice lawns, good food and, for four days, delightful weather. On Saturday it poured all day but even this failed to disturb play as good drainage, double-banking and judicious use of the fifth lawn prevented delay. This meant there was nothing to blame except the players' incompetence for the tournament getting further and further behind, which meant an increasingly harassed manager Dave Kibble, and earlier starts each day, culminating in a final day 8am start for David Harrison-Wood which got the tournament back on track. It also enabled David H-W to finish three games before lunch, surely unprecedented.

Sam Murray won his first five games to take an early lead, but then lost his next three, with Dave K and Andy Myers the other early challengers. David H-W was always in the race if he won his ever increasing number of pegged down games, while Annabel McDiarmid's slow start prevented her fantastic finish (seven wins from her last nine) from propelling her into contention. Sarah Hayes was just off the pace, while Luc Berthouze and Nick Parish were the whipping boys whose sole target after day one was avoiding last place.

There was an exciting finish entering the last round with Andy & Dave K on 9 wins and Sam & David H-W on 8, and none of them playing each other. Dave K and Sam both lost quickly, but with Luc and Nick both starting winning turns against Andy and David H-W respectively, manager Kibble was left wondering if he would prefer to come second, or to be part of a two or three-way play-off starting at 5pm. As it turned out Nick and Luc reverted to type and broke down on their winning turns, meaning that Andy's win was enough to give him the trophy, with Dave and David tying for second.

We owe a huge debt of gratitude to the Hunstanton members, in particular for uncomplainingly mowing and setting up the lawns for us to play earlier and earlier every day. We would not have finished without their immense effort.