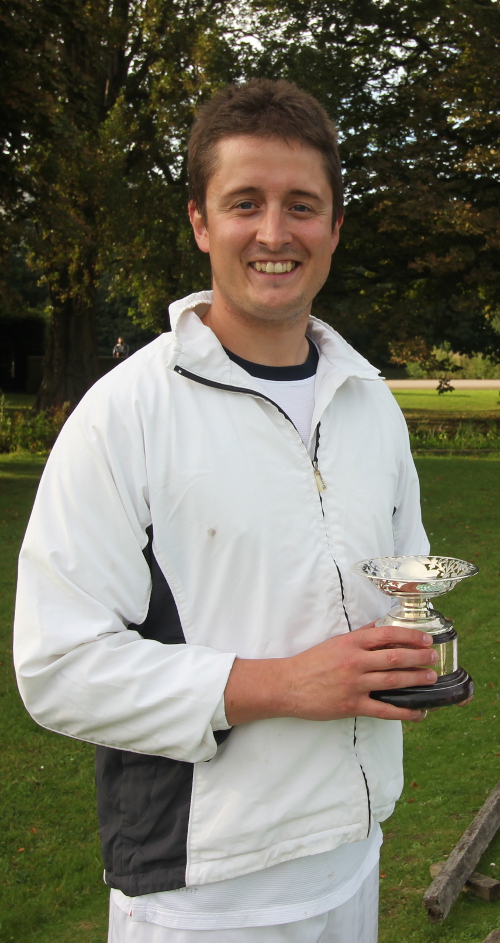 Twelve keen players turned up as planned to brave the deluge on Saturday. The rain held off long enough for most of the first round but then arrived in force. The conditions were easy and an impressive amount of peeling commenced. By the end of the weekend there had been seventeen peeling turns in 45 games, including a very tidy sextuple from Ian Lines against his wife Debbie. He explained that he thought he ought to try something special as it was his 1200th win and his 600th peeling turn.

At the end of day one Omied Hallam was leader in the club house with 5 out of 5 wins, and there were 4 players on only one loss. Omied looked good all day and had his first run of three triples on the trot.

Timed to coincide with the excellent tea provided by Rosie, the crowd enjoyed the entertainment provided, especially when Omied, wired from Phillip's ball at hoop 2, lifted his ball and took his lift from 'D' baulk i.e. about four yards west of the west end of B baulk. Both players were oblivious, much to the amusement of the watching experts. Despite Omied hitting in frequently, he just couldn't run hoop 6, and Phillip's impressive position taking won the day.

Our thanks to Beatrice and Rosie for their fantastic catering, to Charlie for keeping the lawns so beautifully and to the Nottingham club for generally looking after us all so well.