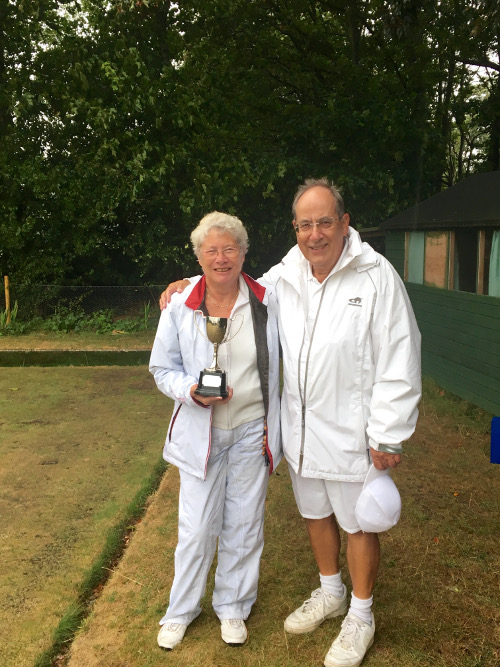 by Mike Huxley at Guildford and Godalming
4 Sep 2016 (GC)

Owing to a number of withdrawals, the field for the first running of the CARA Cup, an A/B level play Golf Croquet tournament, was reduced to a modest 6 players with handicaps ranging from 1 to 6. Conditions were challenging, with fast lawns and firm hoops that would happily reject shots that were not absolutely spot on.

The day started with beautiful sunshine, but cloud was increasingly evident through the morning, with the promise of rain later in the afternoon. The format was an all-play-all block, with those finishing first and second then competing in the final. Roger Goldring (1, Phyllis Court) and Andrea Huxley (4, Guildford and Godalming) each achieved four wins out of five in the block, thus qualifying for the final. Meanwhile, tournament 'rookies' Neil and Jane Humphreys (6 and 5 respectively, Chichester and Fishbourne) were definitely punching above their weight as judged by their handicaps, and Chris Heath, (2, Guildford and Godalming) was pottering along very nicely. The manager refuses to say anything about his rather dismal day.

Time for the final round, and time for the rain, which started just as the final round began. In the final, Andrea took a 4-1 lead over Roger, from which he was unable to recover, try as he might. As the game went on, the intensity of precipitation increased to deluge level. Fortunately, the game was just finished by the time puddles started appearing on the lawns. Andrea closed out the game 7-5 to win her first tournament for several years.