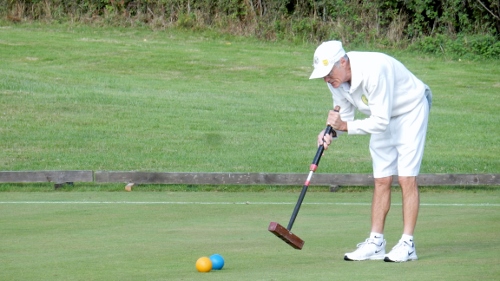 Tony in play on court 1 at Hamptworth. (Photo: Peter Wilson)

At the end of round four the Swiss format had declared a winner. Therefore, by agreement, lunch was extended and the final round was shortened to 18 point games allowing extra time for the return trips across the country.

Many, if not most of the games, were very exciting and close. With handicaps ranging from 1 to 20 all sorts of challenges were created.

Tony played exceptionally well throughout the tournament and ended with 5/5. His fourth round game versus Will was decisive and decided on the time turn. Had that gone the other way the tournament would have been wide open in the final round.

The trophy and tray were presented by Quiller who thanked Hamptworth for the provision of single banking and ideal hoops, lawns and weather.

Many thanks to them for exemplary sportsmanship throughout and to their clubs for supporting this tournament.