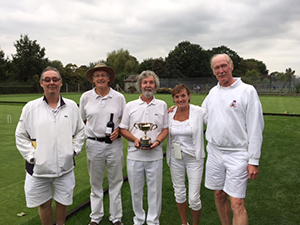 This was run as a 4 round swiss with the winners proceeding to knockout for the semis and final. There was a shoot out between 3 players to determine one of the semi-final places which Neil Coote won. Neil then won his semi against Andrew Dutton to play Kevin Carter in the final where he won by +21 to take the Trophy.