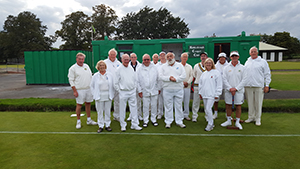 by Dennis Scarr at Middlesborough
24 Sep 2016 (Other News)

Inter Federation Challenge matches can be a bit like the English weather - predictable. Pleasant enough but like a book you've read before, you know what is going to happen !

So, when Yorkshire Croquet Federation approached Croquet North suggesting an Inter Fed Challenge to fit somewhere in an already busy schedule of events it was not unreasonable for CN to ask itself… why would we want to do this?

The question we asked ourselves was could this event

With these goals in mind we suggested a format to Yorkshire which they agreed to with more than a little enthusiasm.

The format would be a CN Fed and a Yorkshire Fed Team each consisting of 8 players taking part in a full day match with each player playing every format.

The first session would be 4 games of AC Handicap Doubles ( Alternate Stroke ) time limited at 2.45hrs.

Session two would be 4 games of level play GC Doubles time limited at 45 mins each. ( best of 3 )

The final session would be 8 games of 1 Ball. Handicap - No time limit.

In deciding pairings for GC doubles any players who were predominantly AC would be paired with a team member who has an understanding of GC doubles tactics and visa versa. 1 Ball would very nicely bring together skills applied in both codes and effectively all 8 team members would be on their own. To add extra interest to the 1Ball which as the final element of the 3 format challenge was likely to decide who is the overall winner we agreed to borrow an approach from the Ryder Cup in that each captain produced a playing order without any attempt to match handicaps. So if one Fed wanted to " front load " its playing order because early wins would get them over the line, then it would be up to the other Captain to second guess the oppositions tactics and respond accordingly.

Scoring for the event was agreed as

So, to the match.

Croquet Norths 8 players had AC handicaps ranging from 1 to 12 with an average of 7. Although the GC event was level play, GC handicaps, for those who had handicaps were a similar spread to AC.

Yorkshire Feds 7 players ( a late withdrawal through illness required some last minute adjustments including the Chairman of Croquet North filling the vacant 1ball slot for Yorkshire …… sensibly it was agreed that the result of that particular match should not count to the overall score…just in case !) had AC handicaps ranging from 10 to 18 with an average of 14. Again GC handicaps had a similar spread with only 1 very low GC handicap.

Tea was delayed until after the 1ball which resulted in 3 wins and 3 points for CN and 4 for Yorkshire.

Although the event was about Team, individually, maximum points were won by 3 players, Mark Simmerson from Yorkshire and Phil Errington and Mike Akester from Croquet North.

Was the event a success - did it meet its objectives….. I believe it did. The format was assisted by Middlesbrough having 4 lawns, the weather was good, if I bit windy and the camaraderie and sportsmanship between the two teams was a pleasure to behold.

Food for thought if your Inter Fed format is looking a bit tired !