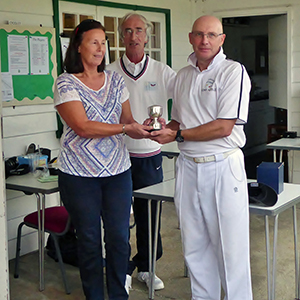 This event's inaugural visit to Ryde was dedicated to the memory of Richard Harris, a twice past winner from the Ryde CC who sadly passed away earlier in the year.

Playing off scratch and conceding 55 extra turns across the block, Noble took the place of a withdrawal and won 11 of his 13 all-play-all games, two wins ahead of Ryde's Pam Sim in second place.

The players were shocked to discover that fleeces and gloves were preferred wear on Day 1 as a cold northerly wind and overcast skies replaced the balmy September heatwave. The addition of hot soup to the lunch menu was welcomed by all and the added incentive 'to play with reasonable dispatch' was a manager's dream; all seven rounds completed by 6.15pm.

The ensuing evening meal at a local restaurant was a far more comfortable environment in which to mull over the day's play; including a bizarre wrong ball / offside situation.

Noble took an overnight lead on six wins, one ahead of Watford's Geoff Johnson and a chasing pack one more behind.

There was much to play for as summer returned on Day 2 and the gloves were off.

Despite a second defeat (this time to Pam Sim), Noble edged further ahead whilst Johnson slipped back allowing a strong finish from Sim that lifted her into the runner-up spot.

An enthusiastic local contingent of spectators enjoyed the more leisurely play in warm sunshine and were much amused by a display of apparent colour vision deficiency from two female players. A scoring peg of the opponent's colour (pocketed from a previous game) was used to claim a hoop score and shortly afterwards they reverted to the familiar 'out of sequence play', before unknowingly correcting the error to score the tie-break hoop!

The 'joker in the pack' award almost certainly goes to Ron Piper of Guildford (another lucky loser) who was playing off 11 and with a total of 99 extra turns! He took on all-comers with impunity; show any sign of weakness and another jawsed ball was awaiting you.

Several players with limited tournament experience were attracted to this competition and we hope that they will feel encouraged to take on similar challenges in the near future as a result.