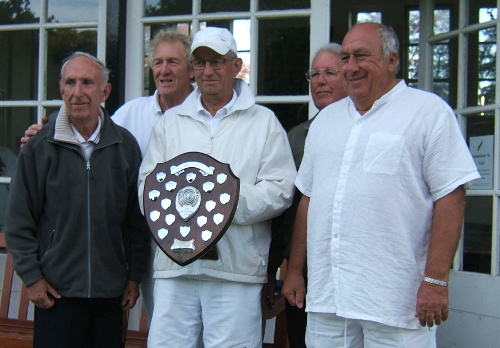 After a slightly late start due to fog and lanes closed on the motorway, Hunstanton won the doubles and one of the morning singles to take a 2-0 lead into lunch, the other singles being pegged down with about 20 minutes remaining on the clock (as lunch had been ready for some time). "Sunny Hunny" had certainly bought their weather with them, as it turned into a glorious day.

The tightest game in the afternoon was between Mike Bowser and Andrew Killick. The bisques having gone, Mike rolled his balls to the peg and pegged one out, but Andrew then hit, and reached peg and peg himself, leaving himself a longish rush out of corner 2. Mike went half-way up the West boundary and Andrew took his rush to about 8 yards East of the peg. Time was called while he was contemplating what to do. Any thoughts?

He clearly needed to peg out one of his balls to level the score and eventually decided to take-off and peg out the striker's ball, without moving the opponent's, but taking care not to leave a double of peg and ball. Mike also took stock ... and decided to play about three yards short of the peg, again not leaving a double. Andrew shot at the ball and narrowly missed, leaving Mike a nervous dribble at the peg, to take what by then was the deciding game. A hasty presentation and photographs hopefully just allowed David Haslam, the Hunstanton captain, time to take a tram to the station and catch his train.