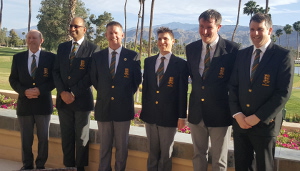 The MacRobertson Shield is the top tier of the World Croquet Federation's World Team Championship. Australia, England, New Zealand, and the United States of America, compete for this coveted trophy, taking place 18 April - 4 May at the Mission Hills Country Club in Rancho Mirage, California, USA.

The World Team Championship is the Olympics of Association Croquet. It is played every three or four years in one of the competing countries.

See the MacRob Facebook page for the the latest gossip or watch a James Hopgood montage video for a flavour of the action.