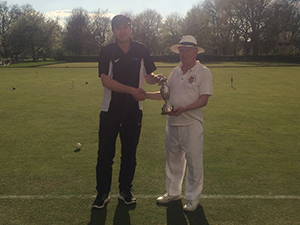 1st-2nd April, Ealing. The event aims to provide a healthy number of games as a warm up for the season, and saw 43 games played (two less than the previous year). Of these, 26 games involved triples (compared to just 15 triples and one sextuple in 2016). Much of this was due to the field being the strongest the event has seen so far, with two players (Paddy Chapman and James Hopgood both -2.5) using the event as a Mac warm-up, and all of of the other players having handicaps of -1 to -2 except for one -0.5.

The lawns were flat and fast, hoops tight, the weather kind, and the food delicious.

Paddy won by virtue of winning 6 out of 7 games, only losing to Christian Carter who came second overall. Duncan Reeve managed to play the most games, winning 4 out of 9.