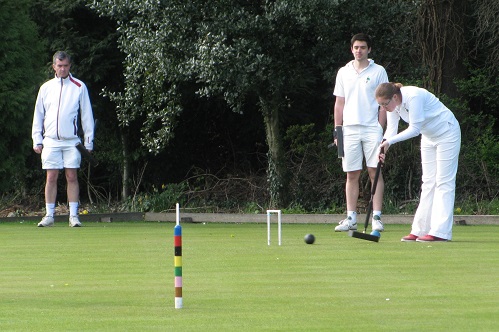 Beaten 2016 finalists Ashby overcame tough opponents to win through to the quarter-finals of the GC Inter-Club Championship.

Ashby faced their hardest first round tie in the Inter-Club for several years. Their opponents Nottingham were playing in this competition for the first time but had the potential to field a team of top favourites. Ashby were fortunate that the MacRobertson Shield interfered with Nottingham being able to assemble some of their strongest possible players.

Mid April is more early than Ashby have ever played an Inter-Club tie (15 April being the joint earliest and only the third one in April of 150 GC Inter-Club matches to date). This earliness certainly put a cold edge to the wind and the temperature only properly warmed up once the sun began to peek through the clouds during the course of the afternoon.

The Easter weekend prevented David Bell from appearing for Ashby but otherwise their team consisted of four minus players who have turned out numerous times for them in the past. Ashby were also fortunate in benefitting from a Nottingham club event on Good Friday, when Will Gee and Rachel Rowe were able to make use of their dual club memberships and play alongside the complete Nottingham team. This event left Tim King and Mike O'Brian at a slight disadvantage as the Ashby courts have yet to properly lose their winter shagginess.

Nottingham used their advantages to good effect early on.

Kath Wright played with calm focus and, without hitting any especially powerful shots, made some timely long clearances and tidily ran her hoops. She finished the first game by rolling through hoop ten after hitting away one of King's balls from a relatively long distance.

In the meantime, the doubles rubber had battled over an epic hoop one and was a long way behind the two singles rubbers.

By contrast, Euan Burridge and O'Brian were rocketing through a two-game win to the former, who survived a hoop thirteen in the first game and finished the rubber with the unusual feat of running hoop eleven and twelve in one turn. This shot generally requires an angled attempt where the hoop leg sends the ball spinning round the peg but on this occasion the younger Burridge encountered a useful hill to secure a highly creditable victory against such an experienced opponent.

King had begun to shake out of an early malaise in the second half of his first game and carried this momentum into the second. He made few mistakes in that game (winning 7-3) and then, although Wright kept the game close through to 4-4, he secured the first rubber point for Ashby. His final shot replicated the trickery of Wright's winning one in the first; on this occasion, hoop eleven falling to the fortunate roll through of his clearing ball.

The doubles was into game two by this stage, after Gee and Rowe had fought their way to a 7-4 win in the first.

The Nottingham pair of Richard Bilton and Ian Burridge, though, found their own strengths and battled back to level the rubber at 1-1 (7-5 in the second game). This result left the teams to follow the usual convention of seeing what happened in the afternoon singles before resuming the deciding game in the doubles if necessary.

The players retired to the pavilion for some welcome warmth and the delights of a buffet lunch.

The early afternoon play began to favour Ashby, who took leads in three of the rubbers (Rowe, O'Brian and King).

At the top of the order though, the elder Burridge was determined to serve with pride as team captain and took full advantage of Gee not finding his best form. The former kept Nottingham's hopes alive with a 7-5 win in the first game.

In the end, while the Inter-Club format once again ensured nobody was entirely confident in advance of the final result becoming apparent, all four afternoon rubbers only took two games each.

King followed his morning success by securing the second rubber point for Ashby, although he almost threw away a winning position. His luck held when the younger Burridge missed a short hoop eleven to win the second game. The latter was equally unfortunate when his first ball was only able to approach to unrunnable position to the West of hoop thirteen because hoop twelve was hampering his swing. King took full advantage (Ashby 2-1 Nottingham).

Rowe then put the momentum firmly towards Ashby by completing her win over Bilton (7-6, 7-2) (Ashby 3-1 Nottingham).

The elder Burridge refused to be the one to concede the losing point and took his second game 7-4 (Ashby 3-2 Nottingham).

The doubles match resumed (just in time to entertain Rowe's parents who arrived to spectate) as Wright and O'Brian were locked in a close battle in their second game. The doubles, however, had only reached hoop three when O'Brian prevailed after Wright was unable to run three attempts at hoop thirteen and the Nottingham hopes finally died.

First-timers Nottingham had some opportunities and performed creditably against Ashby, who were playing their 39th Inter-Club tie (next most being Surbiton with 31). Ashby took four ties to register their first win. Nottingham, in contrast, undoubtedly have a pool of talent that will serve them well in future years. Their team also consisted of at least three players who have plenty of potential to improve even further from more experience of national-level GC.

The Ashby team finished the day relieved to have overcome a potentially tricky tie and will now face the winner of Camerton & Peasedown versus Cheltenham in the quarter-finals.