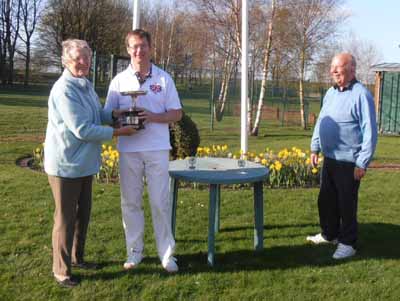 Another great very early season curtain raiser as 18 contenders met yet again in the sort of weather we're getting used to at this event - mild spring sunshine.

He's back to his best - Who? Our 2010 winner, Ian Lines, who couldn't defend the title last year due to injury, but no such problems this year as he marched through the strongest entry field ever to regain the title in yet another thrilling three-game final, coming back from being a game down against Paddy Chapman.

Ian, Paddy, Rutger and James were all using this event to shake of the winter blues prior to entering the Worlds down in Australia in three weeks - good luck to all.

The consolation doubles was taken by Ros Pimlott and Debbie Cornelius (Debbie's first trophy since 1995!).