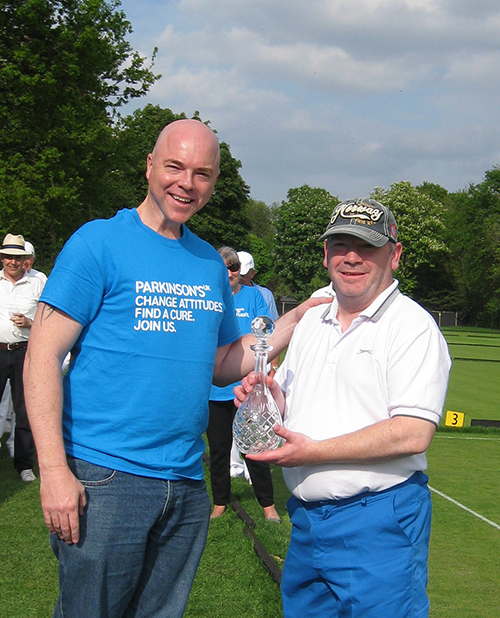 The final of this year's competition took place on 7th May. 35 heats were held across the country, from Middlesbrough to Devon (and not forgetting one in Uruguay!). A record 489 players took part and another record £4,148 (excluding Gift Aid) was raised for our charity this year, Parkinsons UK.

After this, the eleventh year of the Charity One-Ball, charities have benefited by a total of £30,000.

39 players made it to the final, at Surbiton and a dozen made the 'cut' after four rounds of the swiss to continue in a 'premier league'. It should, however, be mentioned that Wendy Wu (Cheltenham), who missed the cut, then won six straight games to be the clear 'Best of the Rest'.

It took nine rounds to sort out the result, soon after tea-time. The winner was Richard Jones (Kington Langley); runner-up (for the second year in a row) was Steve Stuart Matthews (Guildford and Godalming) and third was Doug Dykes (Reigate). Additionally, Jonathan Lamb (Uruguay and Canterbury) won a bottle of fizz for the best break, of nine hoops.

Qualifiers for the final travelled long distances to participate and most added to the enjoyment of the day by 'wearing something blue': the house colour of the charity. It was a fun day, supplemented by a superb three-course lunch and a mountainous tea, provided by the host club.