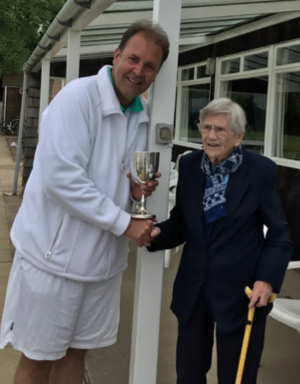 Mark Suter won the inaugural Bernard Neal Trophy at the Cheltenham May weekend and in the process qualified for a CA Silver Medal. Mark defeated Dave Kibble in the final and was unlucky not to complete a fifth turn triple.

The plate was divided into two Egyptians and Peter Moore and Tony Forbes were the two winners.

The history books show that this was Mark's first tournament appearance at Cheltenham for nearly 30 years. It was appropriate that Bernard's widow Liz Neal presented the trophy and subsequent analysis of Mark's ranking record shows that his first opponent in his first tournament (Roehampton in 1987) was Bernard Neal.

The Cheltenham May weekend is one of the few events played as a knockout and hence allows players to qualify for a CA Silver Medal. This year there were 34 entrants and so players who reached the semi finals were eligible. Mark was the only one of the four who had not received one before.