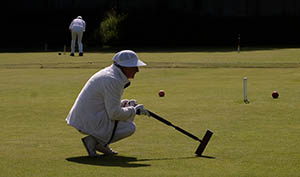 A full entry of 16 players competed this event for the Michael Poole Cup, 6 from the home club and with visitors from Bristol, Cheltenham, Guildford, Cumbria and Edinburgh. The event is for players with handicaps in the range 5 to 12. They were divided into four blocks of four players and on Saturday everybody played a 3 hour game against each of the other players in their block. The lawns were freshly cut on the preceding evening and the hoops firmly set to the correct tolerance. Saturday started overcast, then a cool wind blew up and the evening was sunny and pleasant. In round 1, 3 of the 8 games were completed within the time limit, in the second round none of them did, but then nerves steadied and 5 games in the third round finished with a peg out. The fastest win was by Kathy Wallace in 2 hours exactly. The four block winners were Kathy Wallace (Nailsea), David Hunt (Nailsea), Frances Ransom (Bristol) and Robert Upton (Dyffryn and Nailsea), so this quartet qualified for the semi final stage on Sunday morning. The runners up of each block competed the positions further down the field in a similar arrangement.

The lawns were mowed early on Sunday for the semi final and final stages. The weather was mixed, starting overcast, then drizzle which turned into a downpour in the early afternoon which made all but the most hardy shelter for about 15 minutes and have a brew. The skies then cleared and we finished in brilliant sunshine. The successful semi finalists were Kathy Wallace and Frances Ransom. Kathy had played well from the first game on Saturday and Frances, who has much experience of playing at this standard kept improving after an indifferent start. She gave Kathy few chances and Kathy's long range shots were not finding their targets as well as they had previously. Frances ran out the winner with a score of 26 - 6, lowering her handicap one step in the process.

Frances carries off the Michael Poole Cup, David Houston won the Moroccan competition (for the greatest improvement in index) before flying back to Edinburgh, Kathy Wallace won a prize for the quickest win (in 2 hours exactly) and Hugh Gallacher won a prize for winning against the largest adverse handicap before driving back to Cumbria.