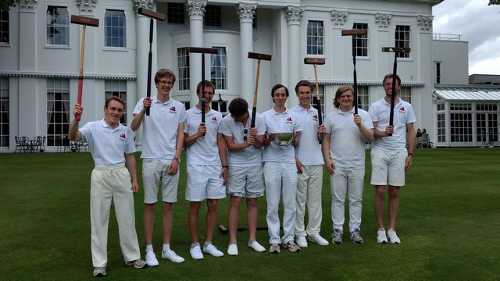 With over 2000 students once again participating in their annual 'cuppers' tournament, Oxford had a larger pool of players to draw from than Cambridge for the annual Varsity Match at Hurlingham. But Cambridge had beaten Oxford in the previous year, their first win since 2003, so another interesting contest was in prospect.

The match used the usual 6-a-side format comprising 3 doubles in the morning and 6 singles in the afternoon, all played Level Advanced. The Hurlingham courts were measured at about 10 Plummers by Ian Plummer himself, the match referee.

The morning made a slow start with cautious play by all, especially on the top court for which a full 50 minutes elapsed before anyone made a single hoop. With a time-limit of only 2.5 hours to ensure a finish in time for lunch, it was evident that all three games would reach that limit, and so it proved. With the stronger team on paper, Cambridge duly closed out the morning to lead 3-0, though only just managing to scrape a +1(T) win on the top court.

Fortified by a good Hurlingham lunch, the afternoon singles were more lively affairs. First to finish was Craig Winfield (Cam) +26tp against Alex Bishop (Ox), Craig's first competitive triple peel, and that was in spite of mistakenly running hoop 1 a second time with his forward ball after a missed lift shot by Alex. Soon afterwards Louis McBride (Cam) also won +26 against Joshua Bull (Ox) with a single rover peel. This put Cambridge in an unassailable 5-0 lead. A short while later Jordan Waters restored some Oxford pride by winning +26 against the top Cambridge player Adam Swinton; then James Brind and Sam Trueman chalked up two more wins for Cambridge, leaving the remaining Oxford player Mo KaramNejadRanjbar eventually to salvage another win +1 on time.

So 7-2 to Cambridge for the match, bringing the historical tally to 27-23 in favour of Cambridge since the first contest back in 1961.

An extended match report with more photos can be found on the East Anglian Federation website at
www.angliacroquet.co.uk/../varsity_match.php