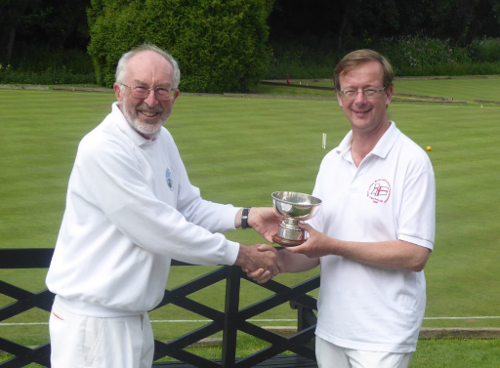 Ian Lines beat James Death in the play-off for the East Midlands Championship, +20tp +14otp, after the finals of both the draw and the process had ended nearly simultaneously with pegged-out endings. A tea-time finish was achieved, but only thanks to Andy and Richard for staying late on Saturday evening, while many of the rest of the field debated whether to go for a film, a Chinese, darts or to the Vic, where they eventually congregated. Andy Myers beat Omied Hallam in the 3rd/4th place play-off and Alain Giraud beat Richard Huxley to win the plate.

The Championship was being played for the 21st time, but a more notable figure is that during it Dave Maugham, one of the tournament's loyalest supporters, completed his 4,000th ranked game.

The weather had cooled considerably since earlier in the week, but the sun appeared from time-to-time and the threatened showers held off. There was a marked contrast in the speed of the lawns: the 5 lawns to the East of the flower beds had been watered, but the bowling greens had not.