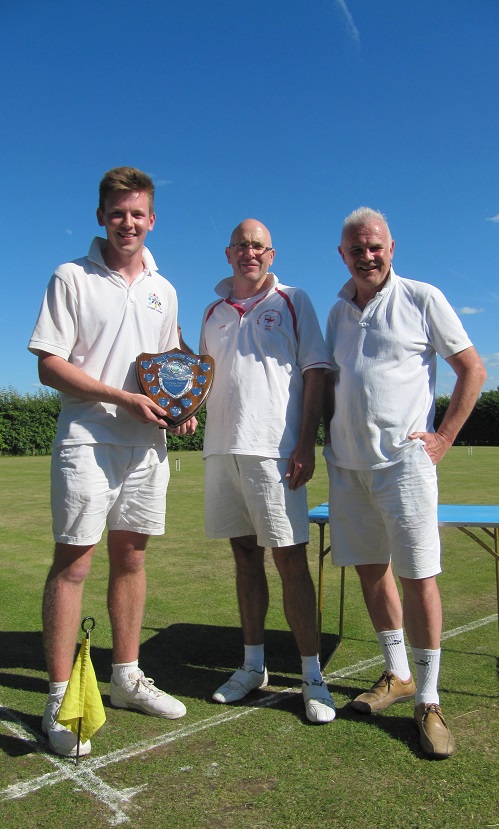 John-Paul Moberly won the National Forest GC Championship for the second time in three attempts. The Championship is a qualifier for the Ascot Cup (the English National GC Singles Championship).

Moberly brushed aside his opponents and only had one wobble when Martin French managed to win the first game of their quarter-final. Moberly kicked on from that set back and won his following, final six games in the knockout 7-0, 7-1, 7-1, 7-3, 7-1, 7-2 against the strongest selection of the other players.

On the three courts at Ashby, the qualifying Swiss for the Championship involved each competitor playing six games in a balanced, pre-drawn sequence. These games were each 13 points.

The first round of the Swiss was the only one that saw any major shocks with Kath Wright (versus David Bell) and Ray Mounfield (versus Mark Daley) both succeeding against top five players in the event (7-6 in each case). These shocks aside, the finest performance of the Swiss was from Christine Wood, who performed above her ranking with three game wins. She was unlucky to miss out on qualifying (coming ninth on net hoops) but went on to claim victory in the consolation event (a super block that included games against other non-qualifiers on the Saturday).

The Tournament Manager battled with the vagaries of play being slightly slower on the Saturday than in 2016 and the need to put Moberly on the last train back to Edinburgh on the Sunday. This battle included, contrary to the original plan, only persuading one quarter-final to play a first game on Saturday evening.

Play did start early on the Sunday but the quarter-finals all went to three games and the Manager was then involved in a three-game semi-final, which was a close contest until Bell showed superior jump shot technique to make some vital hoops in the third game.

All is well that ends well; Moberly conserved energy by the strength of his performance in the semi-final and was ruthless (and swift) in winning the final, so he had a calm and orderly journey to catch his train.

The spectators had shown willing by cheering brief flashes of success from Bell in the final but he was never able to find the consistency that would be needed to put any pressure on his dominant opponent.

The biggest threat to Moberly taking the title was his admission that his handicap card had not been up to date when play started with him having announced himself as a -4. He used the time he had saved by his superior play to put previous results on his card and discovered that his excellent form at the Open Championship had actually taken him to -5.

The Tournament Manager showed discretion and decided that a disqualification incident would not have befitted the "crime"!

Moberly and Bell both qualify for the English National GC Singles Championship on 16 and 17 September at Nottingham.

Ashby provided the usual green and pleasant setting, with hoops posing a moderate (but fair) challenge; rain on Thursday and Friday having taken the real edge off what would have probably have otherwise been very tough conditions.