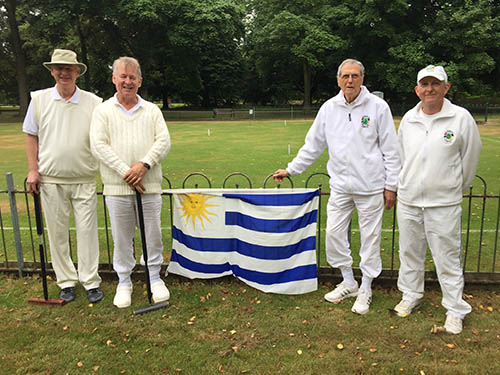 by Jonathan Lamb at Watford
7th July 2017 (Other News)

The British invasion of Uruguay in 1807 was finally avenged 210 years later, when intrepid conquistadores Stantoni and Lambez scaled the white cliffs of Dover, laid waste to the hamlets of Kent and caught the 9.24 to Watford Junction. Here they engaged in mortal combat with local overlords Sir Simon de Hathrell and John Bee the Good.

For a while it seemed that all was perdido for the counterinvaders, as the East Anglians, grunting ferociously to each other in East Anglian, strove to put the gauchos to the steak; but back to back in the doubles the dusky foreigners beat off the locals, and although John Bee the Good proved John Bee the Better against Stantoni, lucky Lambez vanquished Sir Simon de Hathrell with a thrice flaying and then bit several passers-by to celebrate. Rivers of blood coursed through Cassiobury Park, which proves that a) Enoch Powell was right about immigration, at least by croquet players from Uruguay; and b) Britain should never have invaded in 1807.

The national team has now drawn in friendlies with Wales and Germany, beaten Belgium and Watford, and been thrashed by Hurlingham and Hampstead. (They also played Switzerland, but Swiss hospitality was such that no-one can remember the result.)