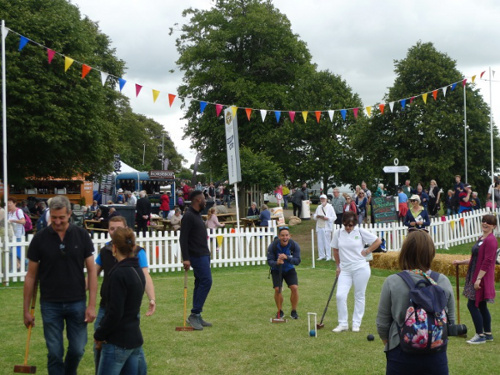 by John Dawson at Blenheim Palace
15th August 2017 (Other News)

CountryfileLive is an annual show (spun off from BBC TV's Countryfile) held over 4 days at Blenheim Palace , near Oxford in August and attended by over 120,000 people.

This year the CA persuaded the organisers to allow a Croquet lawn to be set up in the centre of the Show on which visitors could play under the tutelage of experienced CA players.

Firstly Tony Newport and Pat Edgington from the Eynsham club had to make a lawn out of the parkland. Then 50 players from clubs in the South and South West Federations (and beyond) volunteered to man the lawn over nine hours on each of the four days.

Hundreds of visitors got 15 minute slots to play croquet and thoroughly enjoyed it. Tens of thousands of visitors watched as they walked past the lawn and many stopped to chat to the CA volunteers in white to learn what croquet was about and pick up some leaflets.

Many were local but some came from as far afield as Ireland, Spain, Australia and Canada. The players were of all ages and we even got BBC Countryfile presenter, Anita Rani "to give croquet a go". Afterwards she tweeted "Today I play croquet! I'm a bloomin natural"

Over 80 people were sufficiently interested to leave their email and post code details for Dave Gunn, our Development Officer, to steer them towards clubs near their homes and a further 20 had serious chats with members of clubs local to the Show. How many will end up playing croquet we don't know but it was clear that the CA and modern croquet raised its public profile and made an impact on visitors to the Show.

Many thanks must go to the 50 volunteers who manned the lawn with great enthusiasm, to Tony and Pat for setting up the lawn, to the Eynsham club for providing the equipment, to Chris Roberts, Klim Seabright and Frances Colman for recruiting the volunteers and to Liz Larsson and Dan Atiyah of the CA office for managing the complexities of the admin.