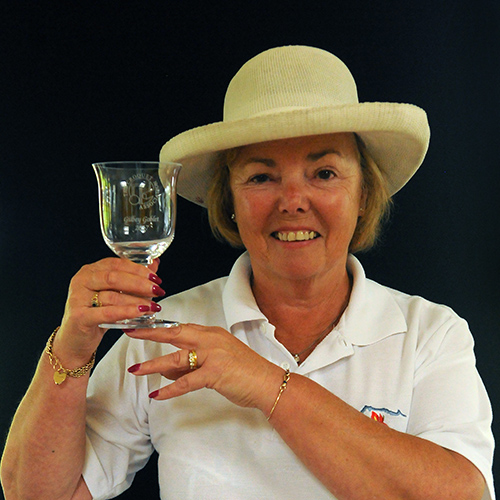 The Challenge and Gilbey returned to Budleigh Salterton CC this year after three years at Sussex County CC.
A week before the tournament the forecast was for 4 fine days, but as time drew nearer it changed dramatically with the Sunday's forecast heavy rain all day. It could therefore be said that there was more than one challenge. With two games scheduled to be played plus two finals on the Sunday, the decision was taken to play the Sunday morning's games on Saturday evening. Given the choice between playing in the evening in fine weather or the morning in the pouring rain - well no contest!!
The rain overnight meant that only 4 of the 9 lawns were playable. All crucial games were played with the exception of the Handicap Final. The two finalists agreed to play this at a club near them both later in the week.

The Tournament started on the Thursday with Event 2 the Handicap Knockout for the Gilbey Goblet and a consolation Swiss for those knocked out. Andre Machell (Watford CC) and Frances Colman (Phyllis Court CC) were the finalists. They played this at Roehampton with Frances beating Andre and winning the Gilbey Goblet.
There was a three-way tie for the consolation event, with Brian Shorney (Eardisley/ Budleigh Salterton CC's),
Nigel Polhill (Ealing CC) and Steve Fisher (Harwell CC) all having 3/4 wins.

Class A for the Roehampton Cup - there was a 3 way tie for first place all with 5/7wins - Simon Hathrell
(Watford CC), Tim Russell (Roehampton CC) and Dave Mundy (Sidmouth/Budleigh Salterton CC's). "Who beat whom" did not produce a winner, but on quality of wins Dave emerged as the winner with Tim as runner-up.

There were two Blocks for Class C for the Reckitt cup.
The Block finalists were Colin Walls with 4/5 wins and Jane Babbage with 5/5 wins. Both from Sidmouth CC.
Both found it very challenging with the lawn becoming very heavy, but in the end Colin was the winner.

Class D for The Stevenson cup was won for the second year running by Quiller Barrett with 5/5 wins with Judith Moore as runner up with 4/5.
Mark Ormerod (Dulwich/Hurlingham CC's) won the prize for the most Triple Peels and Jim Field ( Nailsea CC)
won the prize for the Fastest Game.

Quiller Barrett on behalf of the CA presented the trophies, with exception of the one he won, which was presented by Brian Shorney. Quiller thanked Budleigh Salterton CC for hosting the event. He also thanked everyone involved with running the tournament.