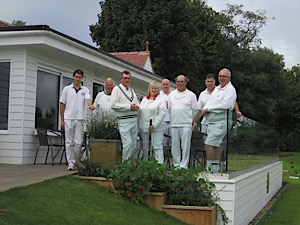 Ryde hosted the Spencer Ell Cup during a frequently wet and windy week. The lawns were heavy (timed at just under eight seconds on the day before play), but the hoops were tight and firm.

Players took some time to adapt to the pace, with Annabel McDiarmid being the quickest to do so, producing the only triple of the opening round. Wilkinson beat every opponent in the first set of games, with a fluent McDiarmid staying in touch with losses to only Wilkinson and Kibble.

Despite stumbling against late replacement Graham Gale, Wilkinson pulled clear, with the other contenders beginning to trade results, he confirmed his victory with two rounds to spare. He recovered from a comical sextuple attempt to win his final game against pre-tournament favourite, Sam Murray.

None of the players fully settled, with just ten triples completed in the tournament.

Ryde Lawn Tennis and Croquet Club were superb hosts, making use of an excellent new clubhouse to provide fantastic catering and a very warm welcome.