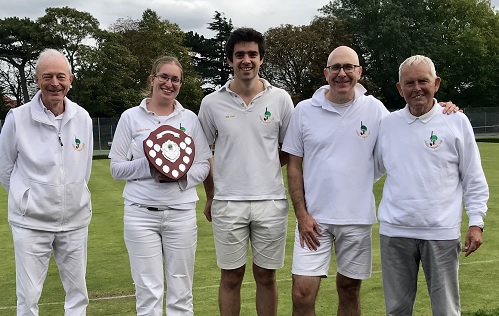 Peterborough Croquet Club became the twelfth different venue of the GC Inter-Club final and witnessed Ashby coming out top in a tight encounter with Letchworth.

The match score was close but only the deciding rubber went to three games, so the number of swings in fortune were relatively limited during the course of the day.

Letchworth were appearing in their first final, having beaten previous winners Surbiton (quarter-finals) and Dulwich (semi-finals) in earlier rounds. Both those ties were away. Letchworth had a settled team of the same four players for the whole season.

Ashby, in contrast, were competing in their tenth final. Their team consisted of players with a total between them of 27 previous appearances in finals. The team was at an unexpected disadvantage when David Bell picked up a bout of tendinitis a couple of days before play. His replacement Mike O'Brian, however, had appeared in all three of Ashby's previous winning teams (2010, 2012, 2015).

The other main feature of the final was a Mounfield as captain of each side, with Ray (non-playing) for Ashby against his son Nick, who was the only Letchworth player with any experience of GC Inter-Club finals, having represented Ashby in 2004 (when they lost against Colchester). The latter became only the third player to represent two different clubs in finals, with the others being Nelson Morrow (Hurlingham and Surbiton) and John Spiers (Blewbury and Surbiton). John is the only player to have won with two different clubs (Blewbury in 2007 and Surbiton in 2011).

The teams arrived for a 10:00 start to discover the weather at odds with the forecast: a light drizzle was in the air. They were suitably keen to start, however, and their enthusiasm was rewarded with the rain soon ceasing. The weather eventually became much brighter and acceptably mild.

Ashby made the initial breakthrough of the day with Tim King winning his first game against John Skingsley, 7-2.

In keeping with the rest of the day, balance was quickly restored by John Noble beating Mike O'Brian 7-4.

In the meantime, the doubles was much tighter but Ashby prevailed at the golden hoop.

All three rubbers showed little change in their second games other than the doubles being slightly less close and Skingsley performing better against King. The consequence was a morning session that was shorter than many and Ashby gaining a 2-1 lead at lunch.

The Peterborough club put on a fantastic catering effort to make the finalists feel most welcome and very satisfied at the end of their meals.

Lunch appeared to give Letchworth the better effect and, although Mounfield only won at the golden hoop against Will Gee, they were looking in good shape with winning the first game in three of the rubbers.

Rachel Rowe was the one immediate success for Ashby, with a 7-4 win against David Tutt. She then had a closer second game but when she won at the golden hoop, Ashby were one point from victory.

Gee gave the Ashby team hope by clinically restoring parity in his rubber.

O'Brian and King though were not making enough headway to overcome their deficits. The former fell first and when the latter could not prevent Noble taking their second game 7-6, Letchworth had drawn level.

Fortunately for Ashby, although the crowd all rushed across to the remaining court, there was not a great deal of tension as Gee had established a 5-3 lead in the deciding game of the deciding rubber. He proceeded to keep the pressure firmly on Mounfield and the score went to 6-3 and then 7-3 without too much further drama. Ashby had become GC Inter-Club Champions for the fourth time (each at a different venue).

The Peterborough spectators were highly attentive to the spectacle of the final. They were generally not familiar with high-level competitive play and had plenty of questions for the Ashby club members who had travelled to support their team. These questions covered rules and tactics, with the whole experience hopefully inspiring Peterborough to join the competitive circuit with greater confidence in their ability to understand and execute the sport.

As Tournament Director, John Bowcott left home at an early hour and was in attendance for the whole day. He handed the trophy to the winning team and thanked Peterborough for the enthusiasm and success with which they hosted the final.

Full scores are available on CroquetScores.

(Thanks to Chris Mounfield, Ray Mounfield and Mike O'Brian for providing input to the content of this news item.)

Finalists of the GC Inter-Club Championship