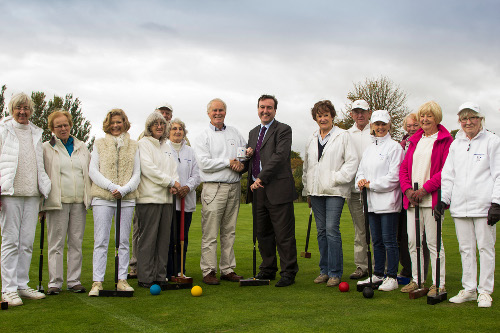 Chester MP, Chris Matheson, accompanied by local councillor, Richard Beacham, made a visit to Chester Croquet Club during one of their club days and tried his hand at croquet. The main purpose of the visit was to update him on the issues associated with croquet being played in a public park in his constituency but it had the additional benefit of briefing him about the Croquet Association's national role in the context of his membership of the House of Commons Select Committee for Digital, Culture, Media and Sport.

On a sunny but blustery autumnal day he was impressed by the numbers and obvious enjoyment of the members playing and gained an understanding of the strong league structure for all levels of play across the North West. He quickly grasped the competitive dimensions of the sport and its social and health benefits for players. The local issues are to be followed up with council representatives and Mr Matheson offered to meet with national officials of the CA at the Houses of Parliament to discuss the future needs of croquet across the country.