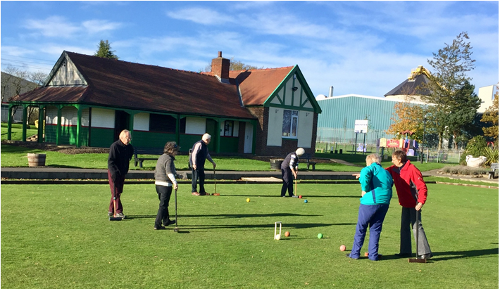 Auckland Croquet Club was founded in 1998 playing on a very small lawn in the grounds of Auckland Castle in Bishop Auckland, Co. Durham owned by the Church Commissioners. Increased rental forced a move two years later to a small disused bowling green with very poor facilities owned by Durham County Council. Here the Club set up a non-standard lawn with members being responsible for its full maintenance. Two years ago the Club started to look for better facilities as Durham County Council was embarking on a programme of asset transfer and had allowed the pavilion and internal amenities to deteriorate beyond repair.

In recent years Club membership had fallen from the high thirties to below 20. Leaflet drops, open afternoons and evenings were held but potential new members were put off by the lack of adequate off-court facilities. Vandalism, break-ins, deteriorating facilities and the failure of the local council to effect the necessary repairs at our old venue in Bishop Auckland made the search for a new venue more urgent.

In April 2016 the Club relocated to Chilton Miners Welfare Recreation ground five miles east of Bishop Auckland. There is a full sized bowling green with very good pavilion facilities in a lovely, well maintained park. The land is owned by the Durham Miners Recreation Welfare and is managed by a Board of Trustees. The Club has signed a Service Level Agreement for a period of 10 years, reviewed annually on a 10 year rolling agreement.

The bowling club at Chilton Miners Welfare Recreation ground disbanded a number of years ago and the green, though roughly cut during the summer had not been maintained. Though the playing surface was level there were many bald patches causing an uneven, wayward surface and an untrue run of the ball. The Club's Service Level Agreement only includes the cutting of the lawn with no provision for improvements or annual maintenance.

Therefore, the Club decided to undertake lawn improvement hence the reason for requesting some financial support from the CA. This would provide a lawn surface suitable for the playing of croquet at Federation level.
An approach was made to Green Thumb for advice on improving the standard of the playing surface. The agent was very knowledgeable in making suggestions as to the annual programme of work needed. The quote was £2438 to be paid monthly by direct debit out of Club funds. This cost was offset by the successful application for a CA grant of £1000. In October 2017 the project was completed.

The main aim was to provide members and visiting players and clubs with a much improved playing surface. To this end the project has been a success. This is complemented by the already existing excellent pavilion facilities all set in a very pleasant and well kept public park with other sports facilities.

At the start of the 2017 season the Club held open days and taster sessions in a promotional drive to increase the membership. These proved successful increasing Club membership by 50%. It was anticipated that our new venue with good facilities together with an improved lawn playing surface would attract new members. Already members from a neighbouring CA club have joined as associate winter members.
Within the park there is space for a second full size croquet lawn which could be developed in
future years subject to the Club increasing membership and finance being available.