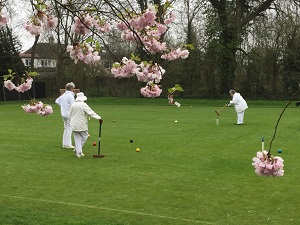 Fifteen players assembled at Surbiton to find conditions damp but playable. Some courts had been under water the day before. As play started, it became clear who were the lower handicap players and a group of four swept all before them through to the first five rounds. The first semi-final saw Sue Rice win comfortably 7-1 against Bridget Goodman. The second the contest was much closer with Ruth Sisley beating Freda Knight 7-3. The final was a battle with tension building towards hoop 13. In the end Ruth Sisley won narrowly 7-6. It was great to see players overcoming such challenging conditions and thoroughly enjoying their day at Surbiton.