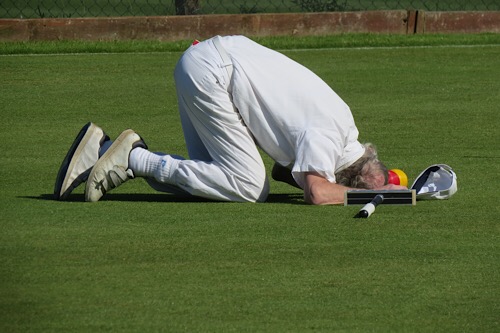 A finely balanced finish to the Robert Prichard Weekend with Mark Avery, Sam Murray and Ian Lines all in contention was nearly scuppered Phil Eardley. Ian after losing to David Marsh -14 on Sunday evening, avoided a second defeat by just squeaking past Phil, the only player to have beaten Mark, by +1T on the Monday morning!

Meanwhile Mark had a late start against David Marsh which Mark won +10TP. Mark then played Sam to determine who would play Ian for the Cup - Mark +25TP.

However by then Ian had recovered his poise and in the 89th and final game of the Tournament he beat Mark +26 to win the Lord Fermoy Cup with 9 from 10. Mark was runner up with 9 from 11 and Sam third out of the 25 assorted players who came to Hunstanton for the May Bank Holiday Tournament played on excellent lawns with tight hoops and in brilliant weather!