Chester Croquet Club gets a fly by on NCD 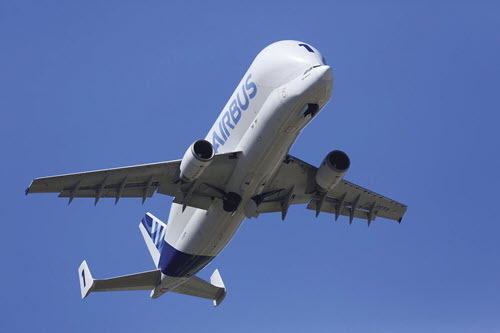 Chester members were enjoying the sunshine with a social last Sunday when we had a fly past by a spectacular plane, an Airbus Beluga. We would like to have thought that the pilot and crew were merely flying over to watch croquet in action on National Croquet Day but in reality they were on a routine flight from nearby Broughton.

Perhaps I should explain; Airbus makes large commercial planes , notably the A380. The wings are made in Broughton but the final plane assembly is in Toulouse or Hamburg. Can't stick the wings in the post so what do you do? The answer is an ingenious modification of an A300 into the Airbus Beluga which can take wings in its "belly".

If you see an unusually large plane fly over your croquet club, you'll now know what it is.

PS an even bigger Beluga is under development to transport a pair of A350 wings in one go. The wings of the A380, which are too large for even the Beluga XL, have to go by sea.

My thanks to Airbus for providing the superb image and the accurate technical data.