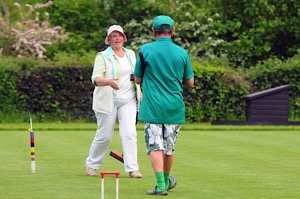 This year we had 37 heats of the Charity One-Ball and 497 participants. Because of the awful weather we had some cancellations and postponements, and some heats had lower attendance than they might have done without the cold and rain. So, this is excellent and yet another record.

We had 40 participants in the final on Sunday 13th May. It was again kindly hosted at Surbiton, with triple-banking across all seven lawns. Because of the numbers involved, there was a lunchtime 'cut' - a bit like in a big golf competition. The top twelve, who had lost no more than one game of the swiss during the morning, went into a separate section to compete for the main trophies, while the remainder continued for a 'Best of the Rest' prize.

Soon after teatime, we had the two finalists: Tom Weston (East Dorset) and Margaret Murray (Bath but who qualified at the Camerton & Peasedown heat). It was a nail-biting finale, watched by over 30 spectators. Tom's shooting was superb and, as Margaret's 4.5 bisques were whittled away, he looked to have it in the bag. However, Margaret displayed great tactical acumen throughout and was the first through the last ('rover') hoop, initially retreating to near the west boundary and then, when Tom set himself up for rover, she moved her ball a little north of the peg. Tom ran rover but not cleanly and he was hampered from both the peg and Margaret's ball. He tried a difficult shot back through the hoop and missed, so Margaret finished, to huge applause.

In the prizegiving Margaret collected this year's engraved decanter, and Tom the runner-up's goblet. Chris Roberts (Phyllis Court, and also well known for being the editor of the Gazette) won the 'Best of the Rest' goblet and a bottle of bubbly went to Jonathan Lamb (Punta Del Este, Uruguay) for the best break: ten hoops.

The prizes were presented by Leia, a lovely little five year old, who had prompted her grandfather to nominate the Downs Syndrome Association as this year's charity. Unfortunately, Peter Gunn (Merton) passed away in February and could not be there to see it. The total amount raised for the Downs Syndrome Association was £4471, which will be supplemented by £903 of Gift Aid - another record, and the first time that our nominated charity will benefit by more than £5000.