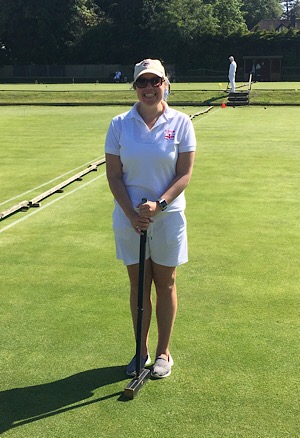 The format was one full day of doubles, followed by 2 days playing singles.

Six pairs took part in the doubles, playing fourteen point games, with a time limit of one and a half hours. Five games were played, each pair playing all others. It was a tightly packed schedule, but we managed to squeeze in a delicious lunch and some cake for tea. Colin Hemming and Rob Waites won their first game, the other four ended in a draw. It was a close contest throughout the day, but for the second year running, the trophies were won by Ron Atkinson and Jeff Farrington.

Sixteen competitors entered the singles with handicaps ranging from minus one and a half to 18. The format was flexible Swiss handicap to the base 10. Ellen Thompson (alias Mrs. T-shirt) played in her first tournament, and managed to win one game in spite of playing off 18 instead of her present handicap of 22. Three players ended the day on 80%, but as Paul had beaten Rich and Neil decided not to play any more games, the trophy was won by Paul Hetherington.

The sun shone throughout the three days and an enjoyable time was had by all. Good food and drink, and excellent company.