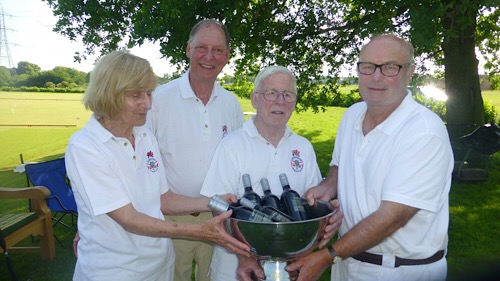 'Canterbury?' said a doubtful voice from the capital, when an SECF team handicap one-ball croquet tournament was first discussed, 'Not sure how many will want to travel to Canterbury. For one-ball?'

Playing association croquet with one ball is a white-knuckle ride, and not for the faint-hearted. In the normal game, if something goes wrong you have other balls to hit, but in this version there's only your opponent's. One slip - and a knife is at your throat. For a niche variant of a niche sport, however, it is suddenly becoming popular. GC players find it less complicated than full AC, a game takes only half an hour, and a fun tournament can be held in a day. That was what Canterbury had offered to host. With three new laser-levelled lawns, a sylvan valley view and a smart clubhouse, they wanted to make a mark. And they did.

Teams materialised from Ramsgate, Tunbridge Wells, Reigate and Surbiton, so with two local sides the lists were soon full. On the day, the sun shone, the sylvan valley shimmered, there was a cooked ham from Hedger's of Canterbury, and a champagne toast to the CA for helping buy a lawnmower. On the killing fields, Tunbridge Wells and the hosts were soon stacking up corpses: Ramsgate provided some star turns, such as a prizewinning seven-hoop break from Christina Rice; but Reigate and Surbiton kept a steady head, using their handicaps well, and in the end it was Martin Pulsford, Surbiton's original doubting Thomas, who took home the champagne bucket trophy and six bottles of wine. In a gracious acceptance speech he said that East Kent had been well worth the journey after all. He and his team would be back next year.